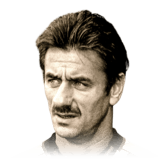 Here it goes, I've picked this guy up for this weekend league to give him a try. Trusted the comments and slapped a hunter on him. He really needs it!

He outpaced everyone when needed. He popped up in front of goal alot exactly what I needed in my 4231.

He has some traits that are very usefull. I've tried Ian Wright before and that dude was a lazy dude compared to Rush

He scored 37 goals 14 assist in those 30 games. Some games I doubted him and other game he carried me to the victory.

One game he scored a hattrick with my only 3 shots on goal from him. Texted the guy saying he was better I just had.. Rush..

His price is exactly where it needs to be. It's not the high end ST but he is alot better than Ciro Immobile for example.

So I don't really do reviews on players but for Ian Rush, I'm making an exception! First of all I will let you know the team I ran around this card. I start in the 4-3-3 with Bale and Hazard at RW and LW, De Jong, Vidal and Modric in the midfield, and my defense was Alba, Ramos, Scream Pique, and Carvajal with Oblak in goal. Now, onto the card, and I have to say I was so presently surprised while using this card! The first three games I played with this card I got 3 hat tricks, with two of the teams I played against being the classic garbage meta squads you see everyone using (Dembele, Rashford, Militao, etc.) Even against teams where the EA handicap was bad, Rush still performed like a god! The one thing that I noticed the most about this card were the runs he made! Normally when players make their attacking runs in this game they run right next to the CB's and when you do try to pass to them the ball is instantly intercepted. This is not the case with Rush! I always noticed him finding that open space where he maintains a good amount of distance from the defenders but is making an excellent run at goal! Now onto his shooting, and I swear this card can finish everything! Long shots, finesse shots, headers, volleys, EVERYTHING! But what really makes his shot so deadly is the shot power. This man has a canon for a leg! The only downsides to this card are his dribbling abilities and his not too great pace. I threw a hunter on my rush so his pace was doable, but I know for some the 3 star skill moves is a massive deal breaker. In the end I give this card a 10/10, as I truly had a blast using him! If you can pick him up, give him a try!

I decided to try him because I was not satisfied with none of the attackers I had tried this year. I am an average player (Gold 1 in Wl, Div 4 in Rivals), playing 4-4-2(2), and for me, this guy has been f**king CRAZY. I tried him with Hunter, just like everyone else, and I have to say his pace was sooo good, but there was no chance against some fast CBs and fullbacks. His biggest con, however, was agility. He sometimes seemed too clunky on the ball, expecially in the area, so I decided to give him Sniper. No idea how good he was going to become. Paired with a fast ST, the duo become unstoppable. Everytime he touched a ball, back of the net. Agility, fast in short dribbling, finesse, outside foot, strenght, composure, this guy have everything to be a perfect striker for this price. 239 matches, 231 goals, 122 assists. Numbers talks by themselves. He's NOT the player for those who likes runs across the fields in counterattacks, but if you are capable of build a scheme, this guy will be a god for his price. Can't wait to try his Prime version.

• Phisicality (Strenght, Stamina Is not a problem at all)

• Dribbling (with Sniper, fixed the Agility and Balance problem)

• Linkabilty (As every other Icon)