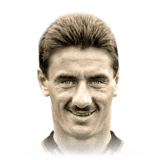 Ian Rush, the man, the myth, the legend.

Fancy sweating it at 6-0 up? He'll break the net

Hands down the best striker I've used so far this fifa, always seems to find the back of the net no matter the angle.

With use of a hunter, he's just able to out pace the majority of center-backs, with strength enough to hold them off to have a shot.

At the time of writing, he's going for 600k which after you buy him, will seem like an absolute bargain.

Pace - Bear in mind, he isn't Adama Traore, King Kenny or anything of the likes. When used with the hunter chem style, he has pace to beat the majority of center-backs, but against the likes of Bellerin, Mendy or Walker, he's going to struggle.

Shooting - I've been playing fifa for a long time, and I have never seen a player who hits the ball with that much power and accuracy every single time. Even if you don't use timed finishing (I don't most of the time) he still places the ball in the bottom corner 9 times out of 10

Dribbling - On the face of it, 86 dribbling is quite good, but you may be put off by the balance/ agility. Fear not, he still feels very nice to use on the ball and the sub-par balance genuinely never seems to be an issue.

Skill Moves - For me, 3* skills is enough for a striker, but a lot of people, it can get annoying so

Long passing - He definitely wont be your chief playmaker, but it's to be expected for 55 long passing

I was looking for a striker at the time with a low budget, and so i took a look and this ian rush looked appealing so i picked him up, and wow this dude was an absolute beast for me. I didn't expect much from him and just wanted to give him a run and I ended up using him for 300+ games even when i could've upgraded because he was absolutely insane. Almost every chance he would finish and is so incredibly underrated.

I got him out of a 50k pack from the Rivals milestone, and when i got him i was hyped, being a liverpool fan. since his first game from him i knew he was going to be awful. and he was that bad i put him into an sbc. (don't know how many games goals he has due to him being in an sbc

He feels so slow on the ball, due to low pace and low agility. majority of defenders will outpace him. his strength is bang average and will only out strength some weak full backs. he can't make any passes and it feels like he's blind. don't even bother trying to dribble past anyone, you might as well give him the ball.