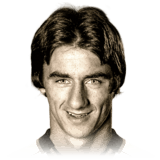 I started this weekend league with mixed feelings. At the beginning, I used inf Havertz as a striker. He wasn't that good as I expected so I decided to sell him. I bought 88 Vieri, and he was oke, but not that good. I already played 20 games, and my score was 12-8..terrible. I sold Vieri too, and I had enough money to buy one of my favourite strikers of all time, Ian Rush. I saw some reviews on YouTube, and it seemed he is a very good striker. I had high expectations, and they were immediately redeemed. In his first match, I was 4-0 down, and I won 5-4. 5 goals of Ian Rush. The games went up, and out of nowhere, I reached something I never reached before. GOLD 1! I went 8-0 with my new striker. He was a machine, a tank, a beast, everything you want.

Honestly, I never thought he would be that fast. He makes perfect runs, he kept defenders of, and he stayed running. A really deserved 9!

Of course a 10. He can shoot from every angle, with the perfect power. He can shoot hard, he can finesse, he can score a volley, a penalty, a free kick, a header. Really astonishing.

I used deadeye, so he has 77 passing, and it felt much better. He got (in my opinion) a great vision, and very good short passing. Long balls are trash, but I didn't expect much of this ingame stat.

He turnes very quick, he has a good enough agility and balance, so it was ideal. Sometimes, he felt a bit clumsy, but I accept it, due his scoring ability.

He is a striker, I don't judge that.

He isn't the strongest one, but he can easily ward off defenders, except the big ones like Van Dijk & Blanc.

I packed baby Rush untradeable from rivals rewards last week and since he has been a goal machine. I would never have thought to buy him as at the time i had mbappe and aubameyang up top in a 41212(2) and now have mbappe up top with Rush. With a hunter he feels so fast and manages to get power on almost every chance.

Shooting: bangs goals in all the time.

Passing: poor passing on the card but gets a surprising amount of assists and i find no issue with his passing.

Strength: compared to most strikers on this game, he is very strong and stands more of a chance against centre backs.

Dribbling: always has control of the ball as its close to his feet

stamina, maybe. if you have a 2 striker formation i find stamina is less of an issue.