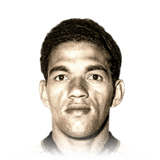 Normally, I opt first to simple gold or IF card before I would consider baby Icons to buy (as they are always a let down in my experience..played many baby icons in FIFA18/19/20)...With this card I had to break my own rules. Let's get the facts straight: Is He expensive? Yes...He is, but let's take a closer look. Neymar at the time of this review is banging at the 1 million price mark. I used Neymar for a complete week of WL, Rivals and some occasional SB (80 games overall). He is one of my favorite player on the game no question, with Messi, but he plays on the left and if you try him at ST he is too weak and the flies in October have a better chance of survival than he does surrounded by VVD, Miliato or Varane.

Why would you consider this Brazilian Icon? Well first of all...the links to everyone...second he is Neymar without the 5 star week foot and this years FIFA is all about Pace (again) and agility in slow and inconsistent game-play while trying to play in mud with gold cards that feel worse than some bronzes).

The in-game stats are better on this card, at least this is what it says at first blink, but most of the better attributes are defending...which is completely useless on this card. Luckily, he has the same pace as Neymar (unnoticeable difference) with better passing and strength (and that little upgrade makes all the difference to play him as an ST). He is my main striker who supports the forward play to Lacazette in a 4-2-2-2. In my opinion he is making an absolutely awesome job doing it so. Passes are accurate, tempo and agility are key to this card. For some reason he has the availability to break away from tackles aimed at him, usually I get a free kick out of it if they tackle on him. He stays on his feet even with a hit and quick to recover (using Hunter Chem) and usually get's lucky bounces on his side (meaning the ball stay with him). It's super easy to get him into a position where he can score from, as he is not as deadly from long shots, but can find the net occasionally. He has 88 composure which is amazing, and usually closes on all the goals that I ask from him, occasionally he misses some sitters (not wide or high) just power blast to the face of the GK, but probably that's my bad aim. All in all, I think the money on the card is well spent as he is unique in every way, by far the best in his position on the right mid and right striker. I assume price will remain at the 1 million tag for some time till Black Friday panic, which is only 100-150 away from Neymar, and he is easier to link (ofc). Try him out you won't be disappointed at least I wasn't for sure.

-Break away from tackles

-Consistency in front of the goal

-4 star weak foot that feels no different than a 5 star.

-Medium / Low (not noticeable but sometimes you need to push him to move higher, stay forward player instruction will solve this)

-Jumping, but heading is useless on FIFA20 anyway.

The hype of use Garrincha is amazing! He is not a player that will do what Eusébio does (But in real life he was way better), but he is quicker than anyone, and the thing that was the most impressive was his ball control. It fels like he has a glue on his feet. Just amazing.

His finish is not amazing. So, not a very good player for play as ST.