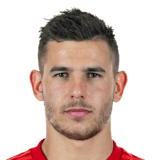 0
Red
Upcoming Matches
P. Chemistry
Squad chemistry
ST
69
RW
71
LW
71
CF
70
RF
70
LF
70
CAM
70
CM
72
RM
73
LM
73
CDM
79
CB
83
LB
82
LWB
81
RB
82
RWB
81
Reset
Basic
Sniper
Finisher
Deadeye
Marksman
Hawk
Artist
Architect
Powerhouse
Maestro
Engine
Sentinel
Guardian
Gladiator
Backbone
Anchor
Hunter
Catalyst
Shadow
Comments
Reviews
0
/600
Update my avatar Dos and don'ts
Top Rated
New
Controversial
Show comments
Top Reviews
Only logged in users can submit a review
A review must be written in English
At least 200 characters are required.
Compare this player to other similar players you have used(optional).
If you import your club to FUTBIN or send us an image with the player data(fill the form below) your review will be marked as verified.
Include what you liked about the player in the pros area and what you disliked about the player in the cons area.
Your review will be manually checked during the next 24 hours.
Chem Style Used
Formations
Position
Rate Player Base Stats (1-10)
Pace
5
Shooting
5
Passing
5
Dribbling
5
Defending
5
Physicality
5
Most Used In:
Submit Review

He is a great cb, has a good pace and defense stats.

Isnt bad with the ball for a cb and good height

Easy too link with pl players, lloris and sissoko for example.

-Good control and passing for a cb

Rating from a defensive perspective only:

First of all, i used varane, then switched to hernandez to safe coins and to buy son (review also exists ) and then i switched back to varane after about 60-70 games with Lucas.

and you can now read why dropped him:

Pace: With anchor he does have the extra pace to catch any striker. Moreover he just do not need any time to get on his full speed level. Its pretty easy to chase the striker and steal the ball. I do not recognize any major difference between him and varane when we talk about pace.

Dribbling: He is quite agile for a defender and he does not turn like a truck like chiellini. I guess its because of his height. He does have low composure but i only recognize it when it came to passing in tight positions but i will come back to that later on.

Overall he is one of the fastest and agilest defenders i played so far.

Shooting: Not Existent and not necessary. Even heading after a corner but as you know heading is not a thing in Fifa20

Passing: Very average for a defender but the thing where he drove me crazy are the high amount of missed passes, especially in tight positions. I tried to solve any situation, even risky ones, with short passes and not to play long ones (in Germany we call it Langholz). Its because i am a ball possession player.

But back to Hernandez: He was not able to play a 2m pass when he got under pressure. All the other defenders i played, especially varane, have been a pretty safe passing ability and you dont have to worry.

My guess its because of his low composure.

Defense: There are some problems i noticed and this is why he was a let down for me and why i prefer other defenders more. Pace, good to have but it was so necessary and essetially for him that the whole defending with him drove me nuts many times. Head-2-Head he is good, Ok. But most of the time i chased the striker (he was out of position) instead of intercept or play by Eye.

I think its the stat: defensive awareness. There is the main difference to varane. With varane you intercept, with hernandez you chase/run after. 2 from 3 times you will get the striker but the one time you don't its in the back of the net.

I could fill books about it. There you can see how he pissed me off.

Physical: Nothing to complain. Only 9/10 because of his height which is only noticeable when it comes to an opponent goal kick. Usually he bullies every one and as i said H2H he is pretty decent.

Overall: He was fullfillment for some games but i was happy when i got back to varane. He is in so much starter/current teams and because i played with him, i know his weak points which helped me a lot and which has been the positive thing about him.