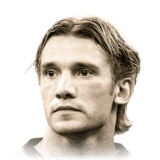 Packed Shevchenko out of the prime icon pack during the 3rd icon swaps. At first i wasn´t too sure that he would do any good. But now after 15 games during the Weekend League he scored 32 times assisting only 3 goals but he is a striker ;). He scores the most crazy long shots with both of his feets. i've used an engine on him. He is fast enough most of the times and his short passes are OK.

Bought Prime Sheva today and decided fuck it, let's do a review. So here we go.

Let's start with his pace. With an Engine he feel fast, not rapid like Mané, but fast enough to dust most defenders.

His shooting is very good. He's very clinical so he's always in the right position to shoot the ball in the back of the net and almost every shot gets in. He's not a post-magnet like the Raùls out there, so that's that.

His passing is average. Short passes are ok, but nothing more than that. There were some IG moments were I needed him to get the ball to one of my wide-players and he just couldn't do it. He's not that consistent in this department. But then again, does he really have to?

Next up: Dribbling. I'm going to be honest here, his dribbling is underrated. Without a boost in agility and balance he feels kind of clunky, but with an Engine he feels smooth. He can dribble in tight spaces, but it's no Pélé. He only has 3* skills, but that ain't a big problem for me, because I'm not a so-called 'skiller'. Honestly, I think this is really up to you.

To finish things off: Physicality. Jumping is good, but is not that necessary this year. 77 Stamina is not a problem at all. Just keep him on 'Stay Forward' and you'll be okay. 79 Strength is good, not great. He can hold off most defenders out there, but he can get bodied from time to time.

To come to a conclusion, I like(d) him and I think he's worth the 460K. Just don't expect him to be some kind of R9, because he's not. However, this man can definitely get the job done.

Dribbling (depends on what chemstyle you use)

When i got shevchenko from the prime icon pack i was very sad and pissed off, but he isn't too bad. Most people would give him an engine chemistry style and that's initially what I did, but he was just too slow. After switching to a hunter, he is quick, and the most clinical finisher i have ever used. 99 or 98 on all key shooting stats with hunter. however, this guy cannot dribble. Even with a sniper, he cannot dribble. It must be his height and agility/balance, but he has 3* skills so no-one will be doing skillruns with him. His passing is also woeful. Weakfoot is good, heading is solid and fakeshots are okay. I say he is good value, but only as one of those cards who you don't dribble with. Get him on a long shot (or any shot) and he won't let you down.