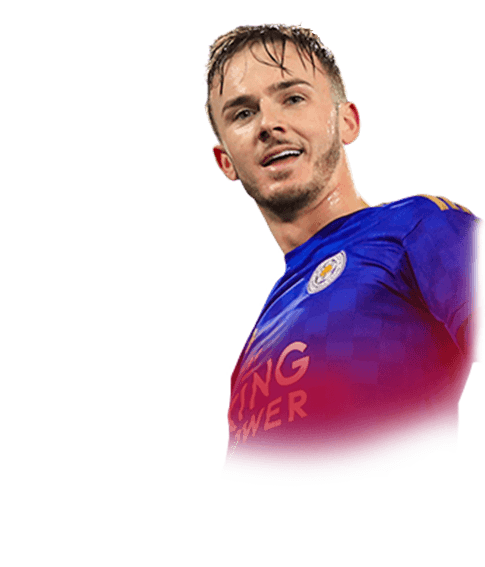 James Maddison's HEADLINERS card is rated 87, he is 175cm | 5'9" tall, right-footed England midfielder (CM) that plays for Leicester City in Premier League with High/Med work rates. His average user review rating is 4.0 out of 5 . He has 4-star weak foot and 4-star skill moves, He does have a real face in-game. James Maddison has 5 special cards with ratings between 79 and 90. He was born on 23-11-1996 and he is now 25 years old.

His real-life stats are currently 3 goals and 1 assists in 6 matches in domestic competition. He also received 2 yellow cards and 0 red cards.

After I got annoyed of de Bruyne, I tried using Son as CAM and Aguero as ST. This didnt work out well as Son´s passing is not very good. So I decided to try out this pal. He plays as CAM in 433(4), a formation where the CAM has to be both a good buildup player and a good finisher as many passes from the wings can reach him. First of all, his passes are insane, as is his dribbling. He plays many deadly passes and can easily take out a whole midfield row with his agility and balance. Those get pushed by Engine Chemstyle, which definitely does his job. I was afraid of his pace, but that wasn´t a problem, acceleration gets pushed to 89, which is enough for a central player.

His shooting though is not perfect. Of course, his longshots are a threat for the opponents and most often cause at least a corner for you. The problem is his finishing. 80 sounds bad, and it really is. He misses open shots and often bottles chances other players on the same level might hit. You can´t change chemstyle though, as Pas and dri are boosted so well and cannot be thrown away. Maestro sadly doesn´t boost finishing, so you might want to search other players when in the box with him.

Overall, he is really fun to play, with weaknesses you can play around in my opinion. He really fills the gap of tradeable CAMs from the PL behind KdB.

Stamina (Had to be subbed off at 70th min)

Strength, but not too much of a problem