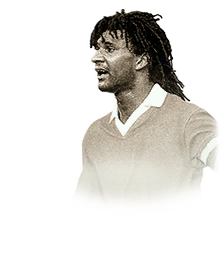 I could never imagine packing Gullit in a Prime or Moments icon pack.

I was freaking out, just like anybody would after packing a 14 MILLION COIN player, and after not playing a single game of FIFA in weeks, i had to try him out.

In my first game, I played him at left CAM in a 4-2-2-2 as Summer heat Perisic and Stoichkov being the two strikers. Right after finishing the first game, I realized playing him at cam was a waste, especially being 6' 3" and not having the best agility. I got rid of stoichkov and played him left striker in the same formation

This is when things started to get interesting

Giving him an engine chemistry style and playing him at striker was definitely the best decision I ever made. Now I know he has the stats for a CM, or CAM, but with the engine chem style he gets that extra agility and 96 balance, while being 6'3". Perfect striker. What more could you ask for?

Having 5 STAR WEAK FOOT is also a major factor. He can finish with both feet, no matter from where he shoots

After playing 20 games, with him as a striker, finishing off with 32 goals and 23 assists (I love to pass a lot between my strikers) he was definitely the best player I've used in FUT from 2015-2020