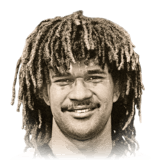 I cannot believe nobody has reviewed him this year...maybe because he is at least 4.5m, so I get that. This year, like others certain players are more OP because of the flow of FUT both past and present Gullit will stay a God forever. This year headers are broken- yet if you toss a lovely cross into the box and he is lurking good luck. VVD, Varane, Ramos, all get tossed by him as i run a 4-1-2-1-2(2) and him playing on the RCM. So cross it and watch the Dredlocks fly. Defensively he is impressive because of his size 6'3 and agility 82. Shooting is easy and he will hit bangers for you all over the pitch because he has a 5 Star WF.

I could have just said if you have played FUT before- this card has not changed, but like a fine wine only has gotten better in time.

When I packed this beautiful card in my mid icon pack I was full of jubilation. Just look at his card and you can see why his price tag is so high. He has all the right stats in the right areas and that additional 5* WF 4*Skill combo is the finishing touch. I played him at CAM in a 4-2-3-1 (with a basic chem style), but I had him come back on defence, given the fact that he is really well-rounded. Let's start with:

Pace: As a CAM he had a suitable amount of pace, enough to get past of most players in the midfield.

Shooting: Everything about his shooting was perfect, he was always in the right position and finished most shots I took with him.

Dribbling: Given his height of 6ft3, he felt very good on the ball, definitely better than other players of the same height.

Defending: His body shape made him so effective at winning the ball back, he covers very well and wins loads of interceptions.

Passing: One of the best passers in the game, whether on the right foot or left foot, 9 times out of 10, the ball will reach the target.

Physical:His presence on the pitch is felt immediately, he runs for the whole game and shrugs players off with ease.

Price, but he is the best box to box midfielder in the game (along with his other cards)