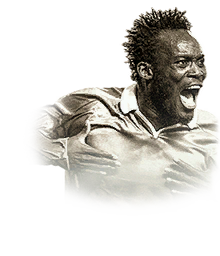 Upgraded my prime moments Guardiola with this guy.

Played him alongside De Jong TOTY in the CDM.

Big big differences but maybe not that obviously as I thougt it would be.

After 23 wins in fut champs I can say that he does what you can expect from a CDM in a perfect solid way.

n the offense definitely not more for me but in the defense a real wall for my opponents.

Stealing balls and tackles feels so easy with him. He doesn't care if it's Cruyff or Neymar. Simply press L2 + R2 and O and the ball is yours.

Passing is with the engine chemistry style very reliable.

Feels a little bit clunky but that gives me a good feeling to tackle with him. So wouldn't say that is something bad on him.

Shooting wasn't that great for me. 0 goals in 30 matches are speaking for itselfs.

Indeed he had a hand full of very good chances. Don't blame him for that maybe ea didn't want me to score a goal in this moments...

In total I would totaly recommend him if you search an full CDM with the icon link bonus of course.

I only recently packed Michael Essien and when I did there were absolute scenes. I decided to sell him, but before I did I had to give him a go. He is an absolute stone wall even with the few games i played with him.