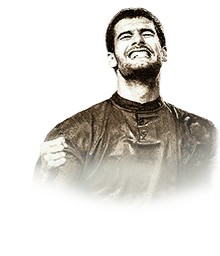 i played like 800 matches with the 85 guardiola, and i always liked him, it's tall enough, i don't like shorter player (i find them worse when intercepting the ball due to their tiny legs), he got high passing,he is good at defending especially with the l2, it's quite agile. so i decided to buy the 91 and it's like my 85 but on steroids, his passing is insane, very good on the ball because of the upgraded agility and balance, he is a very good defender. he has a plus 6 speed and with shadow he is very fast and makes all the good runs denfensive wise and also attacking wise. i tried prime ballack but he was too stiff for me, makelele moments but he was too short, i always go back with the 85 guardiola and now that i have the 91 i'm done for my cdm spot. OT i' m pairing him up with futmas sissoko, for me they are the best cheap duo

One night I was absolutely off my head and had lost about 10 WL games in a row so I had the bright idea of buying this guy. Stat-wise this card is all you can really ask of a CDM. But boy was I wrong. I had already used his baby from icon swaps and quick sold him out of anger. And this card is no different. He is so slow he is practically a paraplegic. To top that off his agility almost made me miss my flight to Ibiza (absolutely mint trip btw) as I was still waiting for him to turn. His only redeeming quality is his defending because to be fair to pep he can put in a tackle. As for shooting, its best I dont mention it. One of his shots nearly killed a fan. To conclude, you would have to be as off your face as I was to buy this guy. 790k looks a decent price for an icon moments but to put it plainly this guy is atrocious.

Defending. Tackled POTM Ben Yedder once. About it really

Can celebrate with his manager card haha very cool and funny.

Practically everything else. Pace, dribbling and passing is subpar and his shooting is bronze goalkeeper standard.