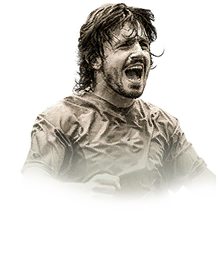 This guy is a monster ingame.

I got all the tokens less than 1 day after icon swaps came because I couldnt imagine a team withot this card and for 7 TOKENS.

this guy outruns every attacker he goes in for eery tackle and he always ALWAYS comes out with the ball.

Hes always helping the defence and somehow he just teleports and helps the attack as well, his shooting surprised me, he finished all the chances close to the goal but he was very inconsistent from long range. with a catalyst his passing was exceptional and he felt really good on the ball.

Along side his 98 aggresion he made every player scared of him.

Gattuso is by far the best value for tokens for me

Everything apart from long range shooting

I picked this Gattuso card from icon swaps for I needed a good defensive midfielder. I started him at cam then switched him to cdm later in game. If there is one thing you should know about gattuso it's that he might take a while to get used to.After I got used to using him he would win every challenge he went in for.He is definitely worth the grind. He is one the short side at 5 foot 10. He is worth the grind considering he only took me 3 days so for playing the game for 3 days to get an op icon (in my opinion).

Dribbling,Shooting but if your playing him cdm that doesn't matter

So I packed Valencia Libertadores out of the untradeable Libertadores player pack a while back, and I had mixed feelings about it: I really liked the card, kind of meta and fun to use, but it was impossible to link in my team. Then, when Icon Swaps 3 came out, I was really excited about Gattuso PIM: I could play my Valencia on 7 chem with him, I needed a CDM and he looked genuinely good.

I managed to get the 7 tokens in a few days, and without hesitation did his SBC. I'm not the best player (I'm a div 6 / gold 1 player), but I now played over 200 games with him, and I'll be honest with you when I say that I'm kind of disappointed.

He replaced my 88 Verstraete in my Bundesliga team, as the more defensive-minded CDM, in a 4231 alongside 90 Kimmich, who's my box-to-box miedfilder. He was an improvement to my team, but he isn't as good as Kimmich for me and now I kind of regret doing him.

His main cons are pace and dribbling. I'm the kind of player who holds possession, and both my CDMs need to help me pass the ball around and build attacks. Kimmich is very good at it, but it seems like Gattuso always needs that one or two extra touches to position himself well before delivering good passes.

So I applied an engine on him, but he still just didn't feel as responsive as you'd want to, and not fast enough.

As I hold possession, I get countered a lot. My back four are very quick (there's a link to my squad if you wanna check), but Gattuso couldn't match the speed of my opponent's attackers. So I applied a catalyst on him. His pace was better, but still not quite enough (85 with catalyst), and he felt too sluggish.

I'm not a skiller, but his 2* skill moves could upset you. His 3* weak foot is also kind of an issue. I like my players to be able to pass the ball with both feets, and his left foot is not very good.

I played two FutChamps with him, but this weekend I felt like I needed to change him. It might be the planned obsolescence, but it felt like every game he made sluggish touches and got pushed of the ball by my opponent players. And that's very dangerous when it's your CDM and you get countered if he loses the ball. I used PIM Roy Keane to replace him. He's not endgame, but he was just better.

However, Gattuso isn't all bad. He has amazing short passing when you slap an engine or a catalyst on him (91 short passing), and he got me a couple of assists. His defending and agressivity are amazing, no need to upgrade those. The only small con on the defensive side is his strength. Even though it says 89, he got pushed of the ball a few times by my opponent, and he can struggle against tall players. The work rates are very good for a CDM though, he's all over the pitch when you're defending and he stays behind when you're attacking. I like it when one of my CDMs is ten metres behind the other when I'm attacking, it always gives me different pass options. And him and Kimmich are very complementary in this way. Plus the dynamic image is really cool.

Overall I'd say that he isn't the best choice for Icon swaps. You may wanna pick him if you're low on coins and absolutely need a CDM, but if I had to do it again I would've saved up to get a better CDM and done the Prime Icon pack. If you're thinking about picking him after the next batch of swap tokens, I don't recommend you to do it. But if ever you do take him, I think that a catalyst would be the best chemistry style.