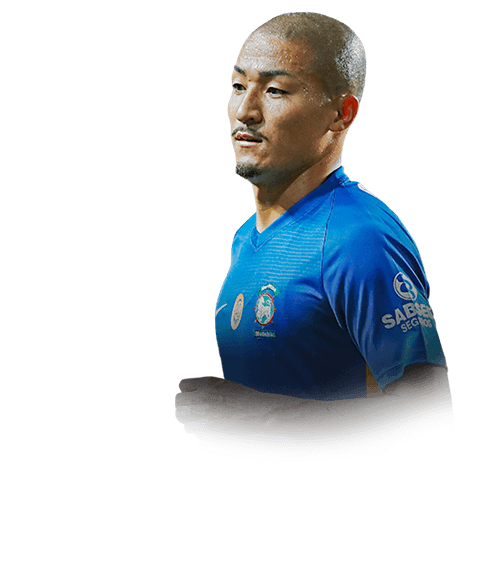 Where do I even start with this lad? He seems to amaze me more and more every time I play with him. His dribbling is immaculate, his shooting is great (91 finishing) and his 96 pace feels even faster due to his height. I probably wouldn't start him but I would keep him on the bench for a super sub. He plays best in a 4-5-1 formation so he has 2 CAMs supplying passes through (If you want to start him). He is a very hard player to defend against due to his 99 agility and his 89 positioning means that he is always there for the rebounds if you take long shots with your CAMs. Personally I would play him with a sniper just to get his in-game dribbling and his composure boosted, but a deadeye would be good as well because this card does lack in passing if you want to play him CF or upfront with another striker. I cannot reiterate this enough, CHOOSE THIS CARD, he is far superior to the other choices unless you already have a super sub (e.g. headliners Orsic or UEL Ryan Kent, because he plays exactly like them!). *Team linked is just my personal team, play him wherever you want just make sure you have strong passers to supply the long passes*.

Free card, can't really go wrong, only thing i found him lacking, was the good weak foot, but as long as you shoot with his strong, you should be good.

This guy is absolutely the best super sub you can possibly ask for (and at level 15 too) He can run past defenders like it's nobody's business and split defences like moses split he red sea with his messi-esque dribbling. his shooting is also pretty good from inside the penalty area.

His pretty awesome record speaks for themselves: (only used as a sub in 60th minute)

shooting (inside the box)

heading ability ( seriously, only CR7 can score headers in this)

defending (which is quite irrelevant)