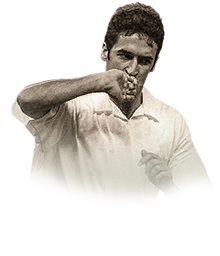 Raúl González Blanco is my idol, as I am a Real Madrid fan. He was my favourite player since i was a kid. I remember how i was crying at home when i saw in the news que was going out of Real Madrid to Schalke. In Madrid he won absolutely everything, he was a f***** beast of striker.

It is shameful how Real Madrid treated Raúl. They did not even make a "goodbye" for him, just a press conference like for Iker Casillas. Very unfair, both vere two of the most important players of the club.

But then, he made history in Schalke. 19 goals in his first season, then he won the German Cup (the only trophy he did not win in Spain), he reached UCL semifinals winning the tie against Valencia and Inter (2-5 in Italy, what a match...). He was so loved in Germany, he was a legend for the fans. Incredible.

This moments prime should be for what he did in Germany instead for the 2002 UCL Final against Bayer Leverkusen.

After this, he went to Al Saad and to he MLS before retiring.

Here I finish the history of this player. Now, lets continue with the review.

So Raúl was my idol and in Fifa i usually buy the icons I like in the real life, not the best in game cards. I only want to play with my idols, and this happen to Raúl. I save a lot of coins and i finally bought Raúl baby, then the medium, the prime icon and finally his moments card. I was so happy when i bought him...

PASSING: i hate this stat. Raúl had a very good passing in the real life but in game sometimes is not accurate, and his long passing is not good. That is the reason i only played raúl as a ST and not as a CF or CAM. His vision is very high but in game is not as good as you expect. If you want to put Raúl in the CM (CF or CAM), maybe with engine he is much better but i have not tested this.

SHOOTING: absolute BEAST. His left foot is magic, his long shoots are just from another world. His shot power is just unstoppable and i scored too much goals of voleys with him... Really, he is incredible. But his right foot is not as good as his left foot, and this is a fucking big error of Ea Sports because in the real life Raúl was just incredible with the two feet... But well, you will score a lot of goals with his right foot. So to sum up, his shooting is amazing and is one of the best players in the game (in this stat), you just need to shoot with his left foot if you want to score. Easy.

DRIBBLING: he looks so agile in game... and his 4 star skills are just enough to enjoy this card. Great composture, great balance... perfect dribbling. No cons. I cannot say to much here because this stat is incredibly perfect, but his agility in game is awesome.

DEFENDING AND PHYSICALITY: he is an absolutely HEADER MAESTRO. He score to much goals in corners or in high crosses. BEAST. He maybe needs a bit more of strenght but he will fight always fight for the ball. He is always in the right position, he always offers passing alternatives to the rest of the players going back to receive the ball... he is just like in every part in the pitch,

When he loses the ball he always make a great pression against the defenders, he is the perfect striker. Good stamina so you can play with him all the match.

So i bought this card without reading any review, i just loved this player and i just bought his card. I have enjoyed him in the game as much as in the real life. Maybe he is not the best striker in the game, but i do not mind. He was one of the best strikers in the world, he is actually the third goallie in European Competitions with 71 goals (just under Cristiano and Messi), so you can imagine the beast he was, and that was the important thing. Enjoying him in real football and having enjoyed him here.

Thank you Raúl for everything. See you in Fifa 21.

I packed this guy in my rewards a couple weeks ago and my word, the best striker I have used this fifa. I was afraid this guy was gonna be sluggish and just be another underwhelming icon when I packed him but he is insane. His finishing is second to only 3 players I have used this fifa however they are all either toty's or 10m+ on the market. He feels like he is floating when he is on the ball and his passing is incredible. He is not adama I have to be honest he isn't slow. He regularly outpaces meta defenders with under 82 or so pace and is the only player think I trust running in behind against actual strong defenders as he can muscle them off. If you can afford him or you packed him and aren't using him stop and reconsider what you're doing. This guy boosted me from a silver 1 gold 3 player to a gold 1 player in 3 weeks. He took a little getting used to be when you do hes unstopabble. Also he is the only player on this game who scores headers which is just weird.

HE CAN ACTUALLY SCORE HEADERS

As a huge Real Madrid fan I couldn't miss an opportunity to play with Raul. I've used his regular prime for over 500 games, so I have a pretty good picture of him. Now this Raul is better than his prime card, but not by much. Most noticeably his dribbling felt more responsive and his finesse shots were more clinical.

I used him as a ST in 4231 or left ST in 4-4-2. Now it's really hard to review this guy. One game he is an absolute machine, scoring everything. Another game he is very hard to dribble with and he will miss a sitter. Overall he wasn't bad for me, but I think I expected a little bit more. His card in FIFA 19 was much better, because dribbling wasn't that important and corners were a thing. Raul has amazing heading, but in FIFA 20 it is not noticeable.

I finished Elite 3 using this guy as my main striker, scoring 37 goals in 37 games. He is a class striker, but I think the TOTS power curve caught him a little too much. For context, last weekend I was using FB Di Maria as my striker and I enjoyed him more. 5* WF is just too important this year and I sometimes felt restricted with how bad Raul's right foot felt.

TL:DR: Buy him if you need links or you love Real Madrid/Raul. Otherwise I believe there are better cards in terms for value for money. Just get a TOTS Benzema or someone.