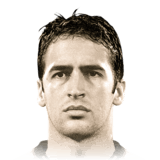 Was looking for a left footed icon striker with at least 4* WF and 4* skills for my squad.

as an exception to stated above I also considered Prime Stoichkov. However the 4* WF and his price convinced me to favor Raul over Stoichkov, furthermore I've seen Raul play (being 33yo).

And always have been a fan of his neat image.

Due to panic sales in regards to TOTY, I was able to snipe him at a good price.

Currently using him with a Hawk chem style, the way I bought him, considering giving him a engine or hunter.

He's been a great presence in my squads so far. Scoring nearly every opportunity; finesse shots, normal shots, low driven and even headers.

His runs are insane, and his passing has been pinpoint. Everythings special you may expect of an icon striker.

Shooting 10/10: everything on his left goes in. His finesse shot trait and chip shot trait combined with his dribbling and decent strengh make his a jack of all traits. 5* WF would have been better but than his price would be around the 2,2 mill.

Dribbling 9/10:, his agility is very good, but not perfect. Together with his endgame composure and balance he feels as smooth as the gameplay lets him.

Passing 10/10: eventhough is card stat indicates only a 82 stat, his vision of 94 and short passing makes it perfect for the striker.

Physical: 8/10: the main reason I kept the hawk style on there is his strenght and agression. but due to his balance he's not pushed of the ball easily.

Overall: Complete striker with a everything you expect from an prime Icon.

Curve and strengh could be a bit higher.

I was looking for a new striker to fit my first squad and thought I give this man a chance during the WL.

As I was lucky enough to pack TOTY De Bruyne (I will never complain about my pack luck again) and did SBC Villa back in the days, I have a very decent front three to shine in every single game.

Raul is a clinical striker, no doubt about that. I would highly recommend him as he improves most of all squad I've seen in Fifa 20 so far. Speed and shooting is superb (Hunter chem) and his dribbling let you pass every defender you come up against. Last weekend he scored 16 Goals in 21 Games (had no time to play all 30 games) and assisted 17. A huge impact as you can see.

But there's his price... Don't get me wrong, you receive a top striker for your coins but I just can't give him a 5 star rating there bc Villa was like 200-250k and is nearly as good as this guy is.

Now you could say that there's no chance to do the Villa SBC at this time but give EA some time to re-release his SBC (and maybe for 100k or whatever)....

Conclusion: Raul is one of the best strikers I played with (significant better than 87 Butra, but I miss his 5* WF). Next to Villa and with DeBruyne at CAM these guys are unstoppable. But for this price you maybe find an Icon (or two) that suits your playstyle or your squad a little more. Nevertheless I give this guy a 5 star overall ranking for his outstanding performance during the last games.

Shooting: 9.5/10 can do everything and loves to score

Passing: 9/10 as a striker his 89 short passing is perfect for those passes in and around the box

Physicality: 8.5/10 his 88 stamina won't let you down, could be a bit stronger but just run around every defender and you won't notice

Hello , this is my first review , sorry in advince for my english . After 4 WL with Raul i want to say his pros and cons .

My main striker was Aguero 92 , but i packed Raul . Raul put him on a bench .

And lets see his pros and cons