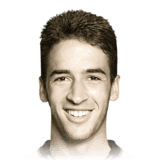 After applying amazon's sales strategy to the FUT market I have coins for the first time ever and got him for 650K as my 2nd Icon ever after being dissappointed with Shevchenko (88).

And let me tell you he is on a different level. His shooting and dribbling are superbe, his passing is great and he is quite fast. At first he felt not that fast, but he is with the ball just as fast as without it. Together with his god like acceleration he gets in shooting positions very easily. And that is where his finishing does the job. Especially the near post finesse shots produce goals 9/10 times - regardless of keeper positioning. Also his dribbling, especially rb drack back, turns, ball rolls and close space L1 movement are just soooo good. His passing his also good, played some nice (back-heel) through balls which came better than expected. His right foot was good as well - but not insane. He didnt do that many runs himself, but i use LB/RB anyway for all my plays. His positioning inside the box is great. Scored in almost every game and also very usefull in the build up.

His biggest weakness is his strenght and lack of aggression. Hawk did not help here. Gets pushed off the ball very easily and doesnt put up much of a fight when tackling defenders/ball shelding. That took some time to get used to. His pace is good, but is precessor (lucas moura) was noticably faster without the ball, providing more counterattacking opportunities. But with the ball he does not slow down and his great acceleration can create a lot of chances.

Will be keeping him for a while - fun to use and is a god in fifa 20. Seems underpriced to me compared to other Icons.

Hello YouTube, welcome back to another player review video. Today we have the 88 Middle Raul Icon card for you all.

Now let’s have a look into the in game stats of this card. As you can see he has balanced stats all around the board. This is what to expect from this card the complete striker. From his 86 short passing to allow him to be used for hold up play to this 90 heading accuracy and his 86 pace he can do it all. Also his 89 agility and 90 balance insures he feel very nippy when on the ball. Let’s get into some footage.

Now he has the perfect work rate of High/Medium with the four star skills four star weakfoot combination which is also perfect. These two factors add to his overall ability of being the complete striker in this game.

In conclusion, 88 Raul is the perfect striker he has no faults. What you see is what get a perfect card he is sooo sooo good. Now he is available in the icon swaps and if you’re here to see if he is worth the 10 token 100% he is no doubt and don’t hesitate in doing this card. Overall he gets a 9.8 with possibly a bit faster.

If this review did help you make sure you subscribe, like and share this video and as always remember relax have a yiros and ill be back.

Passing: As said previously he has 86 short passing which is very elite for a striker. This enable this card to be used in the interplay of your attacks through linking the midfield of your team to the attack. You can also use Raul’s passing through hold up play and allowing players to run beyond him that can be threaded onto goal.

Positioning: His work rates are perfect and with an in game positioning stat of 90 all you can expect is perfection for this card. He is always in the right place at the right time and expect nothing less from Raul.

Shooting: One word… Scintillating. 88 Finishing, 84 shot power and 88 composure equals goals, goals and goals. He will finish anything in and outside the box and will be you Mr. Reliable of your squad.

Dribbling: Raul when comes to dribbling is elite. The 89 ball control, 86 dribbling and 89 agility make this card extremely smooth. Mix this in with his 4 star skills he easily takes on the defender when needed.

Strength: When you look at his stats 74 strength with 48 aggressions you would think he wouldn’t be the strongest. However, Raul is like a bull in a china shop he will fight, fight and fight. Hardly ever when I was using him did he get knocked off the ball this might be due to his 90 balance which might make him stronger than what his stats say he may be.

Bought him for 720k last week (PS4), since I see icons rising in the future. It was definitely a good choice to spend my money on Raul. He is scoring goals for fun and provides some nice linking options. Although he is not on the level of 1,5M+ icons (obviously), he is levels ahead of the defenders you´re facing at the moment. I can only recommend him. The price of 770k seems fair.