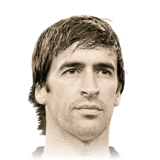 I had his mid version and sold him after the horrendous "update" end of october because he couldnt score (consistently) anymore. I read this card is good and for 350K i decided to give him a go. I feel this card his far better than his mid version, it might be the 7 yes 7!!!! Traits which make the difference. The decline in pace is bearly noticable compared to the mid version. But he is not made for pace abuse play. His dribbling very good, his passing a good surprise too. And he isnt as weak as his mid version, but still gets pushed off the ball quite easily. But the shooting... oh my god! Left foot/right foot who cares? he just scores them in the box. Near post finishes he cant seem to miss! His left foot finesse shot is like finesse shots in Fifa 12. 9/10 he scores. Try it: egde of the box, 3 bar finesse shot with his left foot foot aimed at the far corner and thank me later. Also inside the box finesse shots so good.

Only thing he misses are first touch finishes from fast passes - Thanks EA for the "update". I mean a world class striker is supposed to miss an empty goal because its realistic lol.

I play him as CAM - i think that is the psotion for him. Chemistry style: Hawk - only because I cant get a Hunter. I just found my CAM for the rest of the Game. Try him and you will see for yourself - 350K what a joke, should be +1 million the way he scores

-gets tired when on come back on defending.