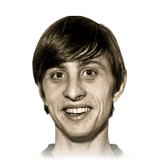 Johan Cruyff is one of the best players i've used this year.

His performance has been always amazing, totally a game changer with 102 goals and 39 assist in 100 games it show how using him in diferent positions and formatios he performed like a god

His shooting is abysmal, 5 stars on WF always feels great but he's clinical too inside and outside the box

The only con i can find is the Stamina, if you are planning to use him in a position that needs to run all the game he can last the 90 minutes but should be replaced after that 90 minutes, since he will perform bad on extra time

If you got the coins give him a try, you will not be dissapointed

I'm not the kind of person who would spend even 1 million coins on a single player, so when a 2.5 million coin player comes via the base icon pack, i had high expectations. Despite never doubting that he would be amazing i had to see for myself. After 10 games, i have scored 23 goals with this guy (playing as a cam) in division rivals. In my honest opinion he doesn't work aswell at striker, and there are many alternatives who can play infront of cruyff. His pace is brilliant, and his physicals dont seem bad either, He seems to be able to hold off even elite defenders so he can get that shot away. His finesses from outside the box are absolutely lethal, he'll score whenever, wherever, and right when you need him. His dribbling is high, he can sometimes take players out of the game and his passing is sufficent (not amazing).

Pretty much all dribbling stats

Bad balance but doesnt affect him much

Stamina is a little low

Bad in the air