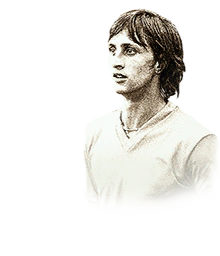 Johan Cruyff's ICON MOMENTS card is rated 96, he is 180cm | 5'11" tall, right-footed Netherlands striker (CF) that plays for Icons in Icons with High/Low work rates. His average user review rating is 5.0 out of 5 . He has 5-star weak foot and 5-star skill moves, giving him the ability to perform every skill move in the game. He does have a real face in-game. Johan Cruyff has 3 special cards with ratings between 89 and 96. He was born on 25-04-1947.

Having used multiple strikers on this game I decided to try out PIM Cruyff. Some of the others strikers I used are TOTS CR7, Bday Mbappe, Middle R9 and a few lower tier cards. For my playstyle this Cruyff is the second best striker in the game behind Bday Mbappe, as Mbappe gets the slight edge becuase of the stamina and shot power. I personally use a lot of dribbling and skill moves and because of the gameplay not always being as responsive ive found that both TOTS CR7 and Mid R9 didnt really suit my playstyle. This Cruyff is the complete package a deadly finisher on both feet who's able to set up other players with his amzing passing stats.

Pace: He isn't as fast as someone like Mbappe but he feels similar to TOTS Neymars speed, which for me is more than fast enough.

Shooting: Shooting is near perfect on this card, near post shots, finess goals you name it and Cruyff is able to score them. Only small downside is you may notice the shotpower on some of the shots he takes but ive found this to only happen in like 1/30 shots I take with him.

Passing: I like my striker being able to set up my other players and Cruyff can definitely do that. I would actually go and say his passing is better than Messi's for fact that he can do it perfectly with both feet.

Dribbling: I've found this Cruyff to be very responsive on the ball, he's very comparable to TOTS Mbappe dribbling wise. Even in less responsive gameplay he gets the job done. The 5 star skillmoves is also very nice as elasticos are really effective using Cruyff.

Defending: He's a striker so this doesn't matter to me.

Stamina: Like ive said earlier Bday Mbappe has the edge on Cruyff because of Stamina. In division rivals he is perfectly fine u can use him for the full 90 minutes without a problem, in a 120 minute weekend league game u might have to sub him off in extra time to get some fresh legs on the field. And if your planning on uisng Cruyff as a cam I suggest turning on conservative interceptions as this helps a little bit with stamina.

Physicality: In this stage of the game with so many TOTS defenders he will get bullied of the ball quite a lot, but for my playstyle which is dribbling and quick passing I havent found the stength that big of an issue.