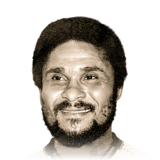 It's not a regular occurence that I publish a Futbin review, I've used plenty of players in the past where i've thought 'hey, this guy is decent' but not this man; he is a different animal altogether. I must say before I speak, I am fully aware that 90-95% of the playerbase cannot afford this card. Granted, he is of quite the expense, but to anyone who isn't within a budget to buy this card I invite you to read this, but I don't expect you to. I just don't want to recieve any hate because many people may envy this item(i can see why) but if this isn't the review for you, I accept that, but don't downvote for no reason. This means in no way I don't expect downvotes, if you think the review is naff, go ahead, but I'd like to inform you of how good this card is and do so in a positive, formal and sometimes comedic manner.

Anyway, it's high time I shut my mouth and proceed with the review.

I applied the marksman chemistry style to Eusebio, granting him a boost of +6 shooting(up to 99), +4 dribbling(up to 94) and +4 physical(up to 78). Marksman takes him to a 94 rated item in all attacking positions apart from CAM(where I played him, he becomes 93). Another reccomendation of my own would be engine, which makes him the speed beast that many desire on the game, as well as boosting the dribbling and passing areas to make him 95 rated in all attacking positions aside striker. Sounds better in terms of RPP, but we all know this isn't all that matters. For me, I took preference to the mammoth shooting boost alongside some much needed physical, but for those who prefer a more pacey Eusebio with better passing, sure, go engine.

Pace- Eusebio has 93 pace and the acceleration/sprint speed divide of 92 and 93 respectively means that he is very balanced by the way of speed, rapid off the mark, rapid in full flight. Don't have to say much more about the matter, his pace makes him blitz any and every CDM on the game and giving him a chem style to boost it isn't what I would do unless you are playing him out wide.

Shooting-Eusebio's shooting is...well it's...interesting let's say. The guy can score from anywhere. His goal tally does all the talking required, inside or outside the box, either foot, driven shot, power shot, finesse, volley, penalty it's all light work for the boy. You can rely on him in front of goal in them tense games and if your struggling, just make sure your in the opponent's half and press B. Ederson? yeah nice. Alisson, haha who? Ter Stegen? get out of the way. It doesn't matter the circumstances the man has the best shot I have experienced in any FIFA, although that is thanks in no small part to this years shooting mechanic, I personally love it, and with this guy you can make the most of it. Buy, shoot, enjoy. Marksman makes all his shooting stats go to a minimum of 97, with 5(five) 99 stats in the shooting department. This matched with the 92 composure and 5* weak foot, dreams come true after all.

Passing- In the CAM role, it is vital that Eusebio has accurate and precise passing, and this virtue is one that he posesses. 88 passing means that the 91 Eusebio has the best passing out of any Eusebio card, including last years prime moments item. I am quite dissapointed that through the marksman I was not able to boost his passing, but it is certainly high-level anyway and the 5* weak foot means finding either striker making a run in behind is found, and just like with Firmino irl, my strikers of Salah and Mane would not be the goalscoring sensations they are without Eusebio, and his passes mean that my 89 Mane and 90 Salah are both positive in WL(I typically hit E2 or E1, never gone T100 unfortunately) and Rivals(low-mid D1). And having a left-footed and right-footed striker behind someone with a 5* weak foot is unbelievable. For me, 5* weak foot is a mandatory requirement for a CAM in a two-striker formation(I switch to 41212(2) in game with Griezmann and Seedorf CMs playing in front of Desailly and behind Eusebio, Salah and Mane leading the line). In 4231 it is not so important, and if you run that maybe striker would actually be his best position depending on how deep you play your CAM.

Dribbling- Agile, responsive and a true dribbler, Eusebio is a joy to play with on the ball. The 4* skills means he can do many effective moves in and around the box, the dragback to shot being a personal favourite. I don't have too much to say on the situation, what you see is what you get, a high-end dribbler who can skill.

Defending-Largely irrelevant, but I didn't mention heading in the shooting department so I'll discuss it now, he leaps like a salmon and usually directs the ball well, but as you know if you've played more than 4 games this year, heading is difficult and even the monsters(your Van Dijk's, Ramos' etcetera) rarely find the target. But for a little man, he does well.

Physical-We have already discussed jumping, with the marksman chemistry style he gets 96 and he does leap like a fish out of water, but the likes of van Dijk and Ramos do usually beat him. Stamina at 88 is great, especially on this game where stamina depletes at less of a rate. The high/medium workrates are perfect for an attacking CAM and even at such an intensity, he still lasts until the 90th and 120th if needs be. The strength and aggression were both boosted via the chemistry style, making him feel slightly stronger and more of a presence when holding off opponents. He is no beast though.

Price(make no mistake about it though he is worth it)

I bought this card that i was heavily anticipating after an amazing elite 2 finish last weekend league and hoped that he would be the missing piece to the puzzle that would let me get elite 1 for the first time. But oh god did he disappoint. His passing and dribbling were god awful for the stats he has and you can really feel how poor his dribbling is. Constant heavy touches and feel very stiff on the ball. I now understand why his card is so much cheaper than the baby. Don't get me wrong he is very lethal in front of goal and his stats for me would suggest he's been good but was forcing every play with him and i had to stop playing weekend league because of how poor he was. For 2.5 million coins i was hoping he'd be an incredible player but he was so underwhelming and despite him being lethal in front of goal an inform ben yedder is miles above eusebio as he can do much more on the ball than eusebio. I'll stick to my tots richarlison he is leagues above this middle eusbio card. For people who are around the gold rank he will perform well for u but for those in elite he is shocking against people who can actually defend.

Lethal in front of goal