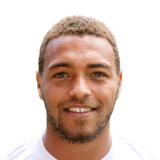 I decided it was time to have some fun in this game and decided to buy a complete eredivisie team. looking at the strikers Dessers is of course the only real option (maybe malen but he was atrocious for me) so I decided to pick him up for 40k. The stats looked decent but after using players like tots son, tots griezmann, etc. those stats are not exactly special anymore.

So it was time to jump into rivals and i can tell you that this card is the most stupid card in the entire game. He boots every single shot with so much power in the goal that even Akinfenwa gets shivers down his spine. Longshots, near post, far post, finesse, chips, everything. He is very fast and quite agile with an engine attached on him. Of course, he doesn't turn like a messi but even ronaldo feels like controlling a donkey compared to Dessers. His physicals are the best i have used, especially combined with that dribbling. He feels like if tots Lukaku could actually turn while on the ball. His passing is decent, if you just pass around with your fellow attackers and midfielders you won't have any issues. Just don't try 360 noscope passes from across the pitch. You might look at the curve and think that each finesse shot will go straight, but even though he will not bend them like beckham he will definitely finnish those finesse shots in and around the box. With the 97 jumping and 99 heading we can only dream what could have been if heading was actually a thing.

All in all, if you have some type of belgian/ eredivisie team you would be dumb, stupid or dumb if you didn't buy him. Give him a go and just simply shoot.