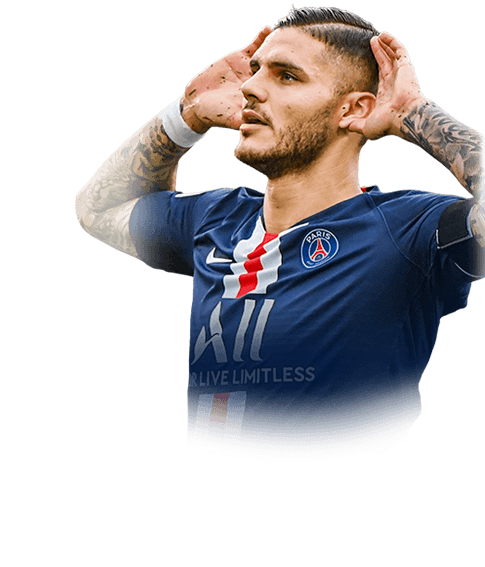 His real-life stats are currently 0 goals and 0 assists in 1 matches in domestic competition. He also received 1 yellow cards and 0 red cards.

this is my first review so dont go hard on me and roast me for this.

so i did this card for only 2k and used alot of good players (Was impulsive ). And i can tell you that it was worth it, this card is crazy, If u use engine, he is fast and super strong he will push VVD away and VVD comes back to kill ur player but ends up giving u a pen, OFC i took it with my goalie so idk if he is good at pens. Btw i missed the pen. lets get serious,

His pace is a big upgrade from his normal card, which is important because i hate slow players.

His shooting is crazy his he can shoot from anywhere inside the it go in 9 out of 10 times, i even scored a hattrick with icardi against Moments Yashin.

but if u shoot with u have to use his strong foot cuz the 4* weakfoot feels like a 3* weakfoot.

but if u are gonna shoot with his weakfoot, then the shot has to be a powershot, because that is his strength. he way better than CR7 at power shooting.

His passing isnt the best but if u put an engine card on him he will feel like Messi, im not lying , i have messi. His long passing is amazing and short passing is even better.

His strength is amazing but not enough to push away VVD (No one is) but he can keep the same level as him. he is strong enough to power thru defenders and shoot

The dribling isnt the worst, he is good and has stats. but HAS THREE STAR SKILLZ. WHHYYYYYY EA.

But do not complete him if u have a girlfriend. u dont wanna end up like Maxi Lopez.

BTW if this wasnt well written is because i am watching the office while doing this.

Man is insane, used him in my first 10 fut champs matches for the weekend. So far i'm 8-2 and Icardi has had a lot to do with that. His finishing is on a Ben Yedder level! He can truly score from anywhere inside the box. The outside of the foot shot trait is truly clutch, it allows him to score from the right side of the goal with his right boot effortlessly. He got 16 goals and they came effortlessly with this man. If you are even considering doing him pull the trigger soon and you will not regret it. I was a bit hesitant at first after seeing his agility and balance but an engine made him absolutely exquisite. Cheap beast.

I'm not gonna lie. This first game i played with this guy i was so disappointed. He wasn't the best on the ball. I played a few more games and was i surprised. This man finishes everything. Yeah his finesses didn't curl but the were always top bins. Inside the box this man is deadly. I noticed that hie attack position felt more like 150 because he was ALWAYS following up from missed opportunities and the 97 reactions proved that. Reminds me a lot of harry kane except he is faster better at dribbling and was way less stiff. Honestly though unless you are certain that you like this kind of striker (ian rush, jamie vardy, etc.) i wouldn't do him. I would try surround him with good passers and dribblers and play him in a 1 striker formation. If you have messi and neymar like me, this man is probably your guy.

Dribbling (not bad but i wouldn't say hes good on the ball. Better than other strikers of this catergory)

This guy didn't even fit in my team, but I am a PSG fan so I decided to do him as he wasn't too expensive (I at least had a Icon midfielder to link him with). It was absolutely worth it. Previously I had 88 TOTW Werner and 87 POTM Vardy and the difference is very noticeable. The main improvement over the other two is he makes much better runs into empty space and does a better job of losing the defenders. The physicality really does make a difference and he is stronger on the ball against defenders than other strikers I have used, even capable of fighting against VVD and Ramos. And while headers aren't perfect, he does latch on to them better than other strikers. The 4* weak foot is also good enough and I haven't lost out in anyway with it. In 13 games (online) he has 27 goal contributions, as his passing is also quite good for a striker, which lets him assist too. Despite his pace being less than the other 2 strikers I've used, he does use it very well and as I said, he runs into open spaces better in my experience.

Does a good job of losing defenders

Pace is excellent with an Engine

3* skill move if that matters to you. I haven't really found it to be a problem

On Sunday in the weekend league I was desperate after struggling and having a terrible record. I was using refresh Bruno as more of a support striker with Ben Yedder in 442. was really good in rivals but cost me in champs (div5, gold2 player). Got this card for my last 15 games and he scored 20 goals and got 7 assists. Him and potm Ben Yedder were unstoppable up front together. If you're a skiller this is a definite no unless u only rely on left stick dribbling which he's pretty good at with engine chemistry style. He's a scrappy striker who finished most chances as well as lucky ones. He's a poacher and class finisher, his attack positioning is usually really good but his medium low workrate can be a bit of a problem on the counter coz he drops behind some other attackers. His weak foot often feels like a 5*, he can score power shots near post and across goal and his finesse shots in the box on the right foot are solid but he does sometimes miss good chances. If he suits your playstyle he's fantastic but if you like to dribble a lot, there are probably better options out there.

Well, this man finishes everything. He saved my worst WL of the year scoring 10 in 6 matches with 3 assists, making me reach Gold 1.

Strong, very quick and with a good pass (with engine), I feel like his shooting is better than Ben Yedder 88's.

Shooting: the best finisher I used this whole year alongside with Prime Crespo

Heading: even in a game when you usually can't score headers, he scored 2 for me in Weekend League (script? Maybe, but he actually scored some beauties with his magnificent head)

Sometimes the dribbling isn't on point like his passes but you can deal with it with an Engine chem style.