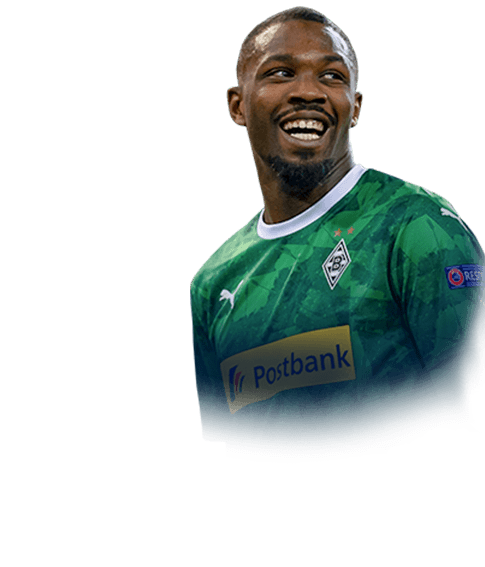 Marcus Thuram's TOTS card is rated 89, he is 192cm | 6'4" tall, right-footed France striker (ST) that plays for Borussia Mönchengladbach in Bundesliga with High/Low work rates. His average user review rating is 4.2 out of 5 . He has 3-star weak foot and 3-star skill moves, He does not have a real face in-game. Marcus Thuram has 3 special cards with ratings between 75 and 89. He was born on 06-08-1997 and he is now 25 years old.

His real-life stats are currently 3 goals and 2 assists in 7 matches in domestic competition. He also received 0 yellow cards and 0 red cards.

Holy moly, what a card.

I got Henry from the prime icon pack right when it first came out. I've played 500 games with Henry (Im a huge Arsenal fan) and I do admit that his balance does somewhat make the card less meta and useable. However, with an engine chem style, Thuram feels like a quick beast, its crazy. In the words of big Nep himself, slap and engine, and he's class. But, Nep would also complain about other petty things like compusre and reactions. Whilst I might not be as good at Fifa as he is (I'm a gold 3 player), he is really good, and and defo worth doing. Get him now, he's not much of a grind and he's also a cheab beast.

This card is an absolute unit.

He is one of those players where the stats do not speak the full facts.

His pace is immaculate. The amount of times he has received the ball, taken a big touch towards the defenders and just ran through them is unreal. 93 pace is not what this card feels like. To me it is genuinely the fastest card I have used. Yes, to me he seems even faster than ffs James, headliners Orsic, moments Sane and birthday Lozano.

His dribbling while not the greatest, gets the job done. He is able to do some basic skill moves, and seems to have more than enough agility for a 6 4 striker. Dragbacks, rolls, fake shots etc all executed to perfection. Although I should add that there have been times where he has just lost the ball but that seems to happen with every player this fifa. Not to mention his 96 dribbling stat which is probably why he seems so fast, bc he got that rubber banding with the ball.

Physically he is amazing. His aggression is a little off but shoulder to shoulder he wins most of the battles. I also used him to get the Laporte objective and got 5/5 wins. Easiest player to score a header with. His stamina is good enough for the whole game.

Let me tell you about his shooting. HE DOES NOT MISS. I have scored some goals from absolutely nutty angles with this card. I can't say much about long shots bc I havent really taken them with him. Personally, I dont like his finesse. I prefer him to just smash the balls with his 99 shot power bc by the time the keepers react, the ball is alredy in the net. Absolute rockets from this guy.

His passing is acceptable. He's got 2 assists, which is not bad.

At the end of the day, He is an excellent striker. Overall I would give him a 9/10 and the only thing that would make him a 10/10 would be a weak foot and skill moves upgrade.

To all of you still deciding if you want to grind for this man, Marcus Thuram, my answer is DEFINITELY. I literally made a account in Futbin just to make this review because I love this card so much

Once I saw this card as a themed objective I knew I needed him my team. It only took me 10 games to get this card and I am so glad I did him.

I originally played him at striker next to werner in a 4-2-2-2 formation and I felt like he could't really do much in game and I didn't like Litmanen at RAM. So I changed my formation to 4-2-3-1 with Thuram on the right, Rues on the left, and Litmanen in the middle.

Now this completely changed how Thuram was. Every time I tried to through ball it to him even if there was 2 defenders he run at the ball with his 93 pace, Collect the ball and absolutely bullies the opposing teams defenders with his 99 strength, once he gets the ball nobody can touch him with his 99 dribbling and ball control( I put an artist on him), and he could either cross it with his 97 vision and 88 crossing(with an artist) or he could shot himself with his 97 shot power and 90 finishing.

I did thuram as soon as he got released and to be honest it was easy. After i completed the Objective and got the card i decided to try him out. I played 14 games with him as a super sub and then decided to make him a starter, so i made a team around him with my untradeables. I played one game with him as a starter but to be honest, he was unbelievable. He scored a hat-trick! So here i am writing a review about him cause he was amazing. The best about his card tho is that even if you don;t like him he is still a great sbc card

Dribbling (It was decent)

Even tho he is not the fastest player he is still able to push through against opponents and bullie them away because of his 99 strength.

His 3* Skills were not a huge problem at all, because he just is not the type of player to dribble through the whole defense, but when he came to shoot in a good position, he scored nearly every time.

Conclusion: I can recommend everybody doing him, further more the challenges are really not that hard.

Pace (in Combination with his Strength)

Feels slow on the ball

I made him pretty easy and fast, and the firsts games he worked out pretty good. But as I kept using him I noticed that he has a lot of problems.

His shooting is in stats, perfect in the game it isn't

Passing is bad, and if u pass the ball with his left foot, consider it a lost ball

His Dribbling is ok, for an 89 Card it isn't

Shooting, I used him in 50 games and only scored 1 Goal outside the Box

Most important: 3* and 3* You can only use his right food and he is not agile, therefore he is just a striker who can just push it in

Thuram is class even though he has has 3 star 3 star and bad balance he is still really good, i put him into my team to try him out and he has know replaced 90 ozil, he is really fast for his height and no one can push him of the ball. he is best with an engine in my opinion

great shooting inside the box

Outside the box finesse isnt good

Simply, All what you want in winger for free

sometime you don't need a lot of words to discribe, this man can do anything in front of the goal or behind the enemy lines