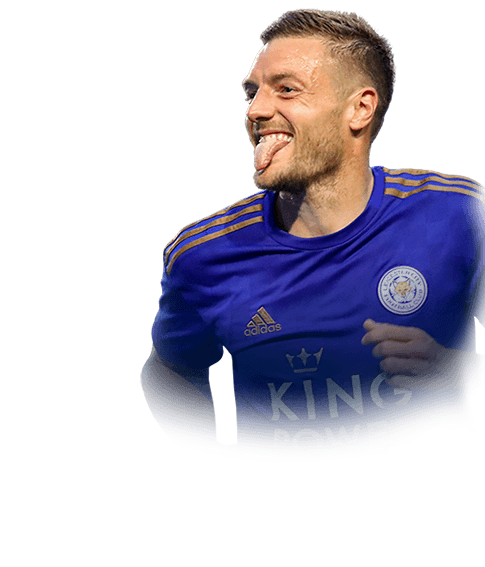 Day 1271 of lockdown: Round 2 of my TOTSSF EPL experience came in the form of the wind-up merchant himself, “the rags to riches story, Jamie Vardy.”  I was hoping we could just take a quick stroll down memory lane and flashback to the POTM Jamie Vardy SBC.  For a moment I actually thought EA was going to give us content at affordable prices this year, but I have been constantly proven wrong.  However, it does not change the fact that the Vardy SBC was one of the craziest value for coins cards, ever.  It was a useable, quality, game-changing card for under 30k (might even have been lower).  I completed that SBC, as many did, and was happy with everything about the card… except, his finishing.  You could outpace, outmaneuver, and outclass your opponent with that card, but I swear you could not score.  I went into this review with the nightmares of Vardy missing chance after chance and was hoping the PTSD would not hold me back from experiencing the quality of Vardy 2.0.  I use 2.0 purposefully given the new and improved 4 STAR WEAK FOOT applied to this card.  I decided to go with the ENGINE chemistry style and played Vardy primarily as the Right ST in the 4-4-2.  It wasn’t until after the 20 matches that I realized a fantastic discovery to end my last 10 matches… but you’ll have to wait for that.  Vardy was the workhorse in the following squad this weekend: 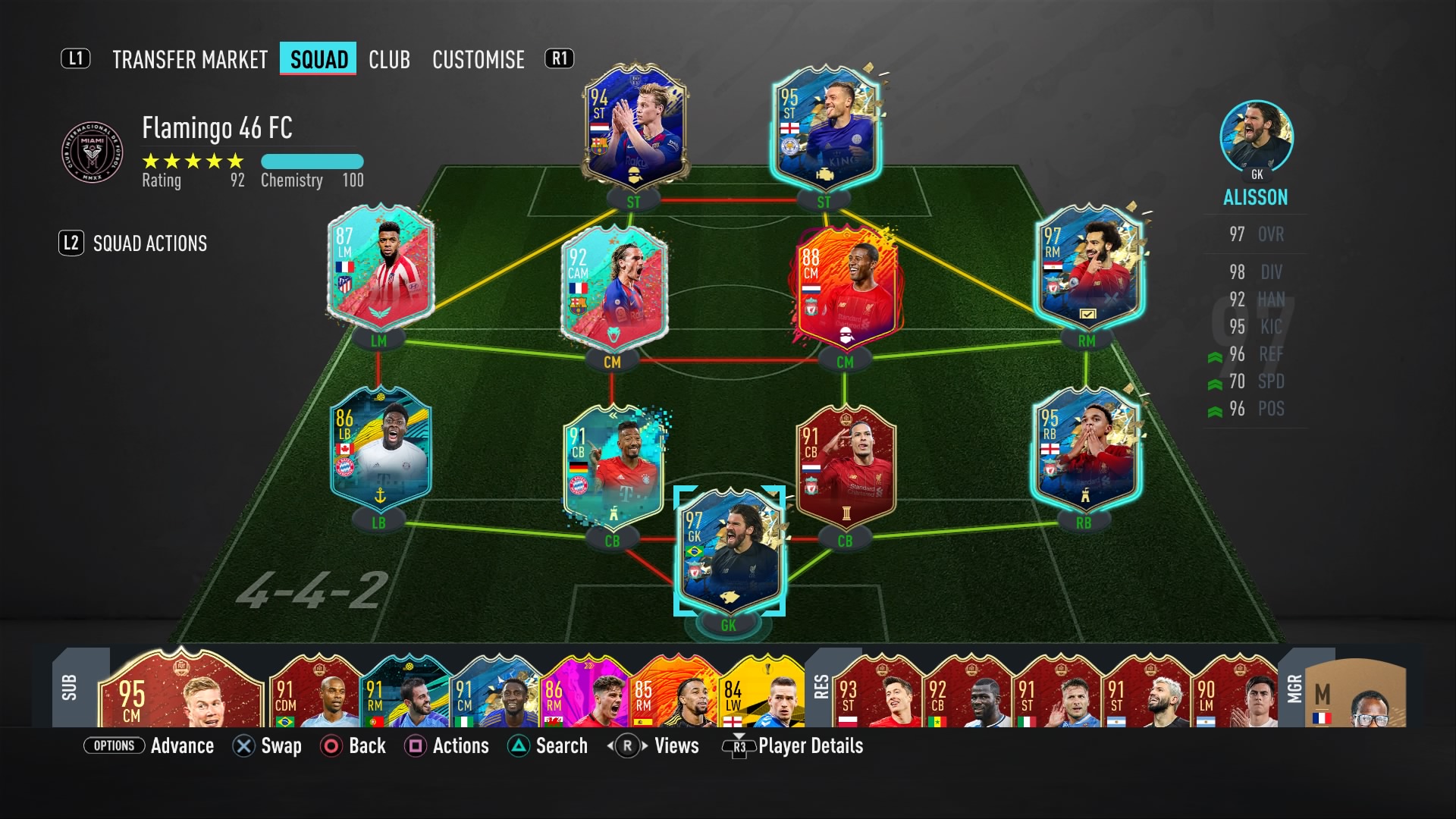 Quickly getting the pace out of the way; 99 ACCELERATION & 99 SPRINT SPEED are there in full effect.  This card is like an F1 race card in poll position when he gets into space.  While not quite as quick off of the mark, Vardy was noticeably faster than Salah in the sprint.  His pace gives you the vital seconds needed to think and make the correct play and was a huge part of the 15 assists Vardy racked up throughout the 20 matches.  I would say at least 8 were simply square ball tap-ins for teammates as his pace took defenders out of the equation.  However, his 99 VISION & 94 SHORT PASSING helped significantly for the remaining assists, and I don’t want it to go unnoticed that this card is a fantastic facilitator and passer of the ball.

But now, I think it is time to address my demons again with this card.  I wish there was a stat kept for posts hit by individual players in FUT from all users.  I have to imagine that Vardy is first overall by a mile; I feel like I alone contributed 40 to that total in my 20 matches.  Post after post after post with this guy, it was so frustrating.  In my video, there is even a post that comes back to Vardy for the tap in the finish.  I still went with a 9/10 because he still finished with 15 goals and his new and improved 4 STAR WEAK FOOT is a noticeable improvement.  I would love to see in the comments if you experienced the same post issue with this card as well… maybe it is just me.

This category can be tricky at times as you try and weigh the options available and whether or not FUT Managers will actually use them in the future.  Vardy did get some excellent TOTSSF links from the EPL squad.  Jordan Henderson has been getting rave reviews (I have not tried yet) and Rashford provides another English link.  As for the Leicester City options I have only enjoyed Söyüncü (beast) myself, while Ndidi (quite slow), and Ayoze Pérez (not quite for me) do not offer links a lot of FUT Managers will end up with.

As a striker, goals are everything, and this card didn’t quite deliver the goods throughout the 20 matches.  A decent return for sure, which is why I gave him a decent 4/5 rating.  The dribbling on this card in the center of the pitch was also a bit of an issue and Vardy struggled in the confined spaces around the box, which is strange considering his 95 AGILITY (which I did not feel at all).  In the end, I blame a combination of a taller player type, mixed with the 3 STAR SKILLS.

However, here is the big reveal as promised.  As a winger, I might consider Vardy a 5/5 end game player.  For my final 10 matches, I brought Prince Griezmann back into the ST position alongside Salah and played Vardy on the RW.  The HIGH/HIGH work rates were insane up and down the right flank.  I even went with 8.5/10 defending as 94 STAMINA & 81 STRENGTH combined to win the ball back again and again; followed by his immediate movement up the wing and into space.  Vardy was honestly one of the best wide players I have used in a while and truth be told if I was reading this myself I wouldn’t believe me either until I witnessed it first-hand.

With the downward market movement, Vardy is currently 750k and I think this is more than fair for what you are getting. Even as a ST this card is well worth that price tag.

I have to leave the winger experiment out of this rating as it was not part of the review.  As a ST if you cannot be trusted to finish key chances in big matches… it simply negates a lot of the positive traits you bring to the table, end of.

I try not to bog readers down with too much information and so I had to shorten the end of this review.  However, I think I touched on all of the key details regarding this card.  Lightning fast, not the best dribbling, powerful shots that heat-seek the post, improved 4 STAR WEAK FOOT, and a diamond in the rough on the wing.  Apologies for the slightly longer review, but this card brought back memories that forced me to lay down on the couch and tell you all my feelings to move on from the past.  Cheers for reading. 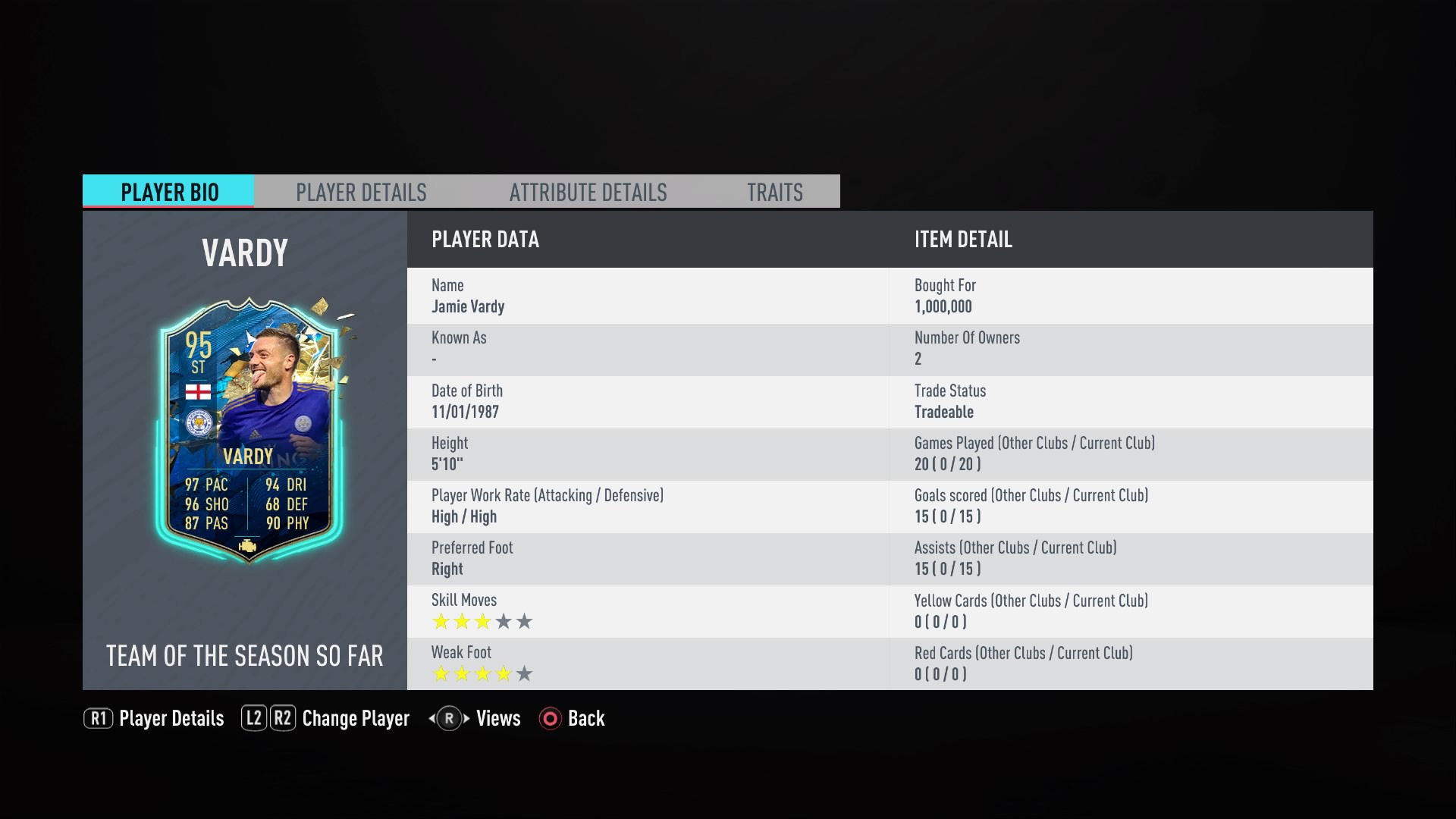 I decided to buy this TOTSS Vardy when I saw his stats, and his price who was only 800k at this time. I wasn't disappointed. He is a real game changer, I use him for all my futchampion, and he was THE player of my futchampion. He is real fast, one of the faster player I used in the game. His shoot is amazing, one shoot= one goal with this guy.

I'm not a skiller player, so his 3 stars skills wasn't a problem, but it could be for some people.

I was very surprise about is ferocity, the player is always trying to take the ball, so, even if he lose the ball, he take it right after.

His 4 stars WF are a real upgrade from is last version.

So I got Jamie Vardy from my guaranteed and slotted him into my team next to my Red TOTSSF Jordan Henderson (who is amazing as well) and I was excited. I play him at striker in a 4231 with Dennis Bergkamp, Moses Simon and FB Saint Maximim at CAMS and Vardy has stolen the show in champs so far. His weak foot feels like a 5* and his power shots across goal or near post are perfect. His pace is incredible, he feels faster than Moses Simon and I don't use a pace chemistry style. I would recommend a MARKSMAN because he doesn't need a pace upgrade and his passing is good enough for a striker but his long shots and strength could do with bring upgraded.

Finishes everything inside the box - finesse is good as well

Agility is amazing when trying to get the angle for the shot.

Aggression is noticeably good, like a hound chasing the ball down.

Got him out of Premier League TOTS Red Player Picks and has been my best striker all year. Extremely well rounded in the key areas like pace, shooting, physical, and dribbling, and even his passing is very good for a striker. There is very little wrong with this card and for under 400k, the price is well worth for an English PL striker.