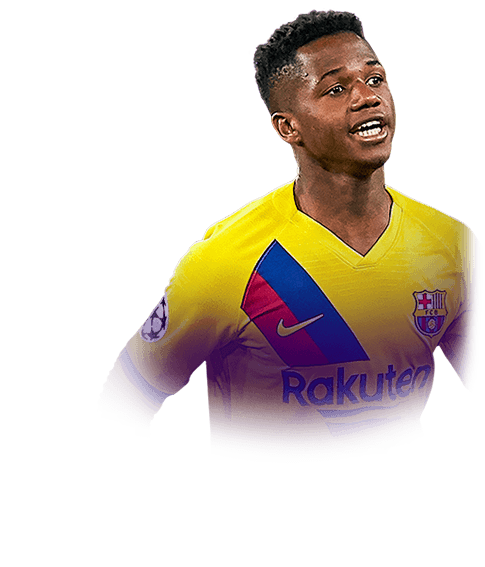 4.5
A Grind that's worth it
7 users liked this review

So when you go into rivals, you always see these two paired up, that's because both are relatively easy to grind. However when I play against people who use this card, I feel they're not unlocking his true potential, the first thing you'll notice is his blistering pace, he is absolutely rapid. With a decent chem style (engine) his dribbling and passing are next to perfect, He plays as a RAM in a 4-2-3-1 formation, normally you don't see these guys get involved in assists unless you're scum and run down the wing and tramp goal it in August. Ansu Fati however gets stuck in, with tidy finishing and sniper-like passing you cannot go wrong, the guy is ridiculous for a free card. I have him pared with Semedo so my right side is very quick and very agile. It took me about 4 hours to do both cards but that's because I'm Div 5 and not 1 but I still recommend doing this card.

Playing rivals for this card seemed like a gruelling task but the objectives are easy and even in high divisions the wealth of players able to be used makes the harder objectives easy as cheap players with great stats are available however after using Fati for 15 games in division 4/5 his stats don't reflect themselves in game. Playing as a right CAM in 4-2-3-1 i wasn't expecting tremendous goal returns as my wide players don't usually contribute with goals and assists however Fati has been underwhelming to say the least. He feels slow and lethargic on the ball his strength on the ball is low even for the card stats and his finishing (99 with a chemistry style) is mediocre and his positioning on attack is very strange at times, only scoring 3 goals and getting 4 assists in 15 matches is poor for a great looking card. If he gets upgraded then I imagine his weaker stats will be balanced out however there are better options in La Liga for a reasonable price.

If you are tight on coins then he could be usable however for players with already end game teams he is player who will find it hard to get onto the reserves bench.

I play in Div 7 and i am a very average player with a meta sweat squad. I was looking forward to using fati as a fun player in rivals after spending 3-4 hours unlocking him i was playing him as a second striker on the right- hand side next to King Kenny Dalglish with Ousmane Dembele (Summer heat) threading in through balls. I was expecting a little bit more, however he is a pace merchant who can pass it into King Kenny. Some big let downs come in the form of 4* 4*. It is a shame that these were not upgraded. 4* WF poor attacking positioning, shot power and strength make it quite hard for him to finish solo against today's Tots Oblak's and Ter Stegen's. Finesse shots with him are surprisingly good and i enjoy his silky left stick dribbling, however with 67 strength he really struggles to gets past van Dijk, prime Blanc and other pacey strong defenders. To wrap things up i think special cards with a silver base always struggle to meet the power curb and there are better alternatives in the position i play him in such as AJ Morales (SL) Ousmane Dembele (SH) and Takefuso Kubo (SH). However i am looking forward to him potentially being upgraded in the future, possibly even SM and WF :).