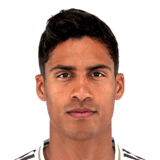 Where do I begin! I managed to pack this guy and he immediately fit into my team vastly improving my defensive record. He's a man mountain. Pace is clearly not an issue, I did use a shadow chem style on him and wow is he rapid. His strength is brilliant and he is rarely outmuscled by anyone. His tackling is next to none. He also wins every ariel duel wherever it may be on the pitch!

I had previously used a centerback partnership of laporte and ramos and while laporte was very good in possession I would get killed sometimes by runs in behind and faster strikers. I got varane and replaced laporte and I don't have many complaints. While I just recently got the Kante that you see in the squad builder, he is very good at cutting players off before they can break away and his height gives him really long strides so he steps across faster strikers and with Sentinel his tackles and strength is excellent. His positioning is so good and he gets in the way of shots all the time and makes key interceptions. He is commanding in the air defensively and his high defensive work rate means his marking is very good and he can track fast strikers's runs really well. I used him in a 4-3-3 false nine for the most part.