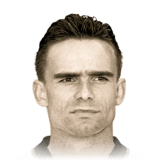 My honest review of prime Overmars. I was coming up to the last weekend league and I really wanted to try a different LW instead of using Neymar for the 100th time. So, I decided to give Overmars a try and I was actually pleasantly surprised with this card, so much so that I have decided to keep him in the team for now. I’m not saying he’s the best card in his position because he’s not, he definitely has some glaring deficiencies in his game, but when you add up the positives this card has to go along with his very reasonable price tag of 570K, you should give him a try and see if he fits your team.

I played a 4231 for my weekend league with him sitting at the LAM spot using the engine chem style (Deadeye is also a good choice). Most of my play is central which is how I score the majority of my goals. However, to shake things up a bit during games I will use my LAM and RAM to bomb down the wings with some one-two play and then try to pass the ball inside to my ST and CAM. Overmars is perfect for this role. First off, he has blistering pace. He also has very good dribbling and his passing doesn’t look particularly great statistically speaking, however I didn’t think it was bad at all. His best quality though is his 5-star weak foot which allows him to play his passes perfectly with both feet. Once he gets in positions to play the cutback, he excels at delivering the final ball because of that weak foot.  He racked up a decent number of assists for me in the 30 WL games and popped up with a few goals here and there. Don’t expect him to be consistent in front of goal because he will let you down sometimes. He’s also pretty weak on the ball as he tends to get bullied by defenders which I expected. Also, only having 3-star skill moves could be a turn-off if you like to skill.

To sum it all up, I believe prime Overmars is good value for coins. He’s nothing special in-game and definitely isn’t close to being the best left winger, but he does all the basics so well and is someone I found to be very reliable and consistent with what he has to offer. If your under a budget but want a competent player patrolling the wing then I would recommend giving Overmars a try.

I don t know what chemstyle to use on him becouse for a winger 95 pace at this stage of the game is just not good enghout but at the same time i feel it s a waste to put a hunter on him .So i play him with sniper . He feels verry agile on the ball and his 5* wf are helping verry much when he is in a scoring situation .His stamina is quite good so i don t need to sub him .He can play cam as well if u don t want to do to often to much skills with him. He is not a game changer or something like that but he does the job in that area .If u need an icon and u don t have much money this card is one of the best solutions imo.Yes , he has 3*skillmoves but u can t have everything at an icon at this price .

PS.i use him as a RAM (he feels the same on LAM)

PSS.he is a play maker not a gol scorer(in case it isn t clear)

feels good at the ball

not the best shooting (with a sniper is decent )