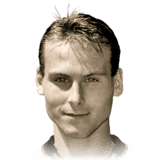 Before I start talking about Nedved, a quick backstory about the squad I built. I used 86 Vardy(ST) and Leroy Sané (RAM) upfront with Sterling(LAM) and Griezmann as a CAM, 4231 in game. The main problem was that, in 90% of my attacks, i was forced to use their strong foot (as they all have 3*WF). My gameplay has become so much predictable.

I decided to open my saved pack during Black Friday, which was a great decision because i packed Neymar and sold him right away for 1.2M (i'm playing on PC).

With 1.5M coins in the bank, i went for a huge upgrade, involving Kanté and Aguero, but couldn't find any good and versatile LW to put as a CAM. Considering my budget, i instantly went for an Icon. At first, I was about to get 87 Barnes, but then I saw 86 Nedved's stats, especially his stamina and his WF, so I took the risk and I bought it. And I am not regretting that decision at all!

86 Nedved is quick, quite reactive with the ball and easy to control, he doesn't feel clumsy at tall, he has an insane passing quality and, of course, an insane finishing. You can play him as a LW, as a CAM, or even as a ST in a 442 or any 2 striker formation.

Depending on where you want to put him (and your playstyle), the chemstyle choice is important. Based on my experience with him, the best chemstyles are:

90 pace for a CAM is more than enough. Usually I make Nedved combine with Aguero to get him behind defenders and he does that really quickly. When Aguero holds the ball and I trigger a run, he's always there on the right timing. When I put him as a LM in a defensive formation, he is involved in good counter attacks, as he gets quickly behind the opponent's RB.

Oh boy... With DEADEYE, his positionning is unbelievable, his finishing is hella consistent (even if sometimes, because of the script, he can hit the post), plus he has fookin 5*WF, so he can shoot with his right foot, or fake shot and turn to get to his left foot and take the shot... In front of the goal, he is unpredictable.

Finesse shots? Not a problem for Pavel.

Powered long shots? Not a problem either, sometimes I feel like he can break the god damn net...

Weak foot shots? Absolutely not a problem, no matter from where you shoot, it's either on the target, or a goal.

Direct Free kicks? If you trained enough, you can score some bangers from free kicks.

So yeah, his shooting is insane.

The deadeye chemstyle gives him a better passing boost than engine, his short passing is insanely consistent (combining with him is a pleasure, thanks to his positionning). His through balls are a bit more inconsistant but it all depends on your ST's positionning and the opponent's defending. When it works, there are impossible to stop.

In FIFA 20, scoring headers from corner kicks are almost impossible, but I remember scoring some bangers with Nedved shooting them, his crosses are quite accurate.

I'm not a skill spammer, but Nedved feels so smooth and so easy to control with the ball.

Nedved's 80 reaction feels like a 85+, his 87 balance will make you win duals against CBs like Militao or Lenglet, his 88 agility will allow him to go through defensive lines easily, and when receiving a long pass, he doesn't stutter. Plus, if you put an engine chemstyle, you will see a huge difference, he will hold the ball a bit more, he will pass defenders quicker....

Doing skills with him is fun, but not as the same level as Leo Messi (obviously lol), especially without a dribbling boost.

When I park the bus to hold the lead (don't blame me for that, not only it's part of football but it is also part of the META in this game, especially in FUT Champs...), he is really useful. His high agility can make him win the ball back after he lost it. His pace is enough to make defensive runs, especially if my LB leaves a gab behind him. Obviously I didn't buy him to play as a defender, so I'm satisfied with his defensive work.

Nedved's stamina is one of the reasons I bought him. 89 stamina for a CAM is really good.

When using a possession based playstyle, he can remain for the entire game, and during overtime as well.

But, of course, if you spam Constant pressure his stamina will get drained.

86 Nedved is a fun and reliable card to use, even if I overspent a bit for him, I think that I made a good deal, considering that it's an Icon and he has been good for me.

If you can get him for around 500K (if you play on console) or for around 600K (on PC), I think that it's a good enough deal, as there are not enough good LM/LW in this game for the same price (as of 8th of December).

86 Nedved doesn't have a lot of cons:

I'm playing Nedved as a CAM in a 4-2-3-1, with Gnabry RAM, Morales LAM, and Lewa at striker, and WOW! I had his prime for the majority of last year, so I've been saving up to try out his baby this year. He actually has different faces with different versions now, I don't know about the middle but the baby has shorter hair and a younger looking face, he also seems bigger for some reason. Anyway, onto the stats

Not that much to say here, he has 90 pace and it shows. He's not at the level of Sterling and Mbappe, also due to his more physical appearance, but he is more than quick enough for CAM or LM/LW/LF.

Probably the stat that puts most people off of getting this card, but with deadeye it's more than enough. Even without any upgrade he is very well rounded in his shooting stats, together with 84 composure you won't have many problems scoring. He's great at long shots as well, I would say his shooting is on par with Lewandowskis, where Lewa is better at 1v1 opportunities and Pavel is better at the edge-of-box finnesses and longshots.

I've yet to see him give a bad pass, he doesn't have to do too many ridiculous through balls, but the passes that he gives are all on point.

Very Neymar and Messi-esque is how I'd describe Nedveds dribbling. He's not exacty as quick as those too, because he's a little taller and heavier, but still extremely agile. I utilise a lot of skill moves and he's very smooth.

I'd say this is N/A but in a 4-2-3-1 the CAM has defensive duties as well. He's positioned correctly when defending and intercepts passes occasionally, he's nothing special defensively but you wouldn't expect him to be either.

Since heading and strength aren't really relevant anymore, I'm only going to look at stamina. He can run the entire game + extra time and still he is at about half stamina.

All in all a very very good CAM, he is a little expensive and there's definitely better money for value players out there, but his price comes with icon status and he is already an endgame forward,

Shooting can very rarely let you down, but still incredibly solid