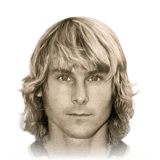 -
Sub out
Upcoming Matches
P. Chemistry
Squad chemistry
ST
87
RW
89
LW
89
CF
89
RF
89
LF
89
CAM
89
CM
87
RM
89
LM
89
CDM
76
CB
69
LB
74
LWB
77
RB
74
RWB
77
Reset
Basic
Sniper
Finisher
Deadeye
Marksman
Hawk
Artist
Architect
Powerhouse
Maestro
Engine
Sentinel
Guardian
Gladiator
Backbone
Anchor
Hunter
Catalyst
Shadow
Comments
Reviews
0
/600
Update my avatar Dos and don'ts
Top Rated
New
Controversial
Show comments
Top Reviews
Only logged in users can submit a review
A review must be written in English
At least 200 characters are required.
Compare this player to other similar players you have used(optional).
If you import your club to FUTBIN or send us an image with the player data(fill the form below) your review will be marked as verified.
Include what you liked about the player in the pros area and what you disliked about the player in the cons area.
Your review will be manually checked during the next 24 hours.
Chem Style Used
Formations
Position
Rate Player Base Stats (1-10)
Pace
5
Shooting
5
Passing
5
Dribbling
5
Defending
5
Physicality
5
Most Used In:
Submit Review

5.0
What a player
24 users liked this review

i bought nedved 91 last week, he is trully a wonderful left forward, can pass, score, dribble, even defend (high stamina makes him possible to run back & forward all the game)

so if you seek a great LF and that you can afford him,don't hesitate, you won't regret it.

Nedved is quite easily the best fifa card I've ever used on fifa i am typically one of those rage sellers that sells their team after losing a few games on every year but this nedved card has stayed with me this entire year and he is the best cam I've ever used better than messi and neymar 100 percent. Crazy thing is I never come up against him on champs and people are really missing out on him. For only 500k u can an endgame card that is all round in everything can pass, dribble, shoot and it has decent strength to hold up them ball and can even put in a few tackles here and there. He's played 200 games for me and scored 165 goals and assisted 107 which is crazy considering I am a div 2 player and get elite pretty much every week and he manages to destroy opponent's god squads with ease breaking down the god tier defences i come up against.