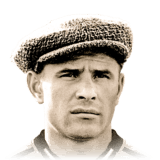 The card isn't terrible. You'd obviously expect that from a 94 rated keeper but some of these reviews would have you think he's like playing a bronze striker in goal. It's not, I found his shot stopping and reflexes quite good and he was quite reliable in goal. I used him for about half a WL before switching back to 91 Ter Stegen. The reason i switched wasn't really down to his shot stopping - I didn't see a difference between him and MATS apart from maybe 1 or 2 shots which MATS probably only would've saved because of his superior traits. The main weakness of this card is the terrible distribution. both throwing and kicking, he's incredibly unreliable when distributing. He's just very weak and inaccurate. Overall, the card isn't as good as a meta keeper like Ter stegen. However, Yashin has a hat. And the hat is really cool.

Saves everything you'd expect from a 94 keeper

Seeing only one bad and one neutral review of prime Yashin here, I felt like there is a bit of injustice. I've packed him from a prime icon pack and played over 900 games with him in Div 3-4 and WL (consistent Gold 1). I feel I have to say a word or two in his defense.

To me, he is actually an excellent goalkeeper. I've tried Ter Stegen, and he wasn't by any means better than Yashin. This guy jumps for the ball like a cat and has amazing reactions; he is a great shot stopper. He also runs very fast in 1 on 1's (70 acceleration on basic chemistry, only 97-rated Alissons are faster). And what I love about him is just how he is always there to pick up a loose ball. He never fails in that: no weird rebounds, no misjudgment. I can see that people complain about his ball distribution, but no complaints from my side. I'm not the guy who starts counterattacks with his keeper, for me his throwing and kicking is just fine.

In FIFA every goalkeeper has occasional bad days, and so does Yashin. But in many games he shines, and honestly, he is at least on par with the best goalkeepers out there. His moments card is even better though, and I consider PIM Yashin the best goalkeeper in FIFA 20 by far. If you've got prime or moments Yashin untradeable, sell your Ter Stegen for some liquid coins and give this guy a chance. I'm sure you won't regret. His unique hat is like a cherry on a cake and adds to the sentimental value of this card.

I was quite surprised when i got this guy out of a icon sbc and couldn't wait using him in WL. i am not a great player (usually gold 3), but when using him my record is 0-7.

genuinely every shot from my opponent went in, and even picking up a loose ball was a sweaty moment during those games.

being the keeper of your squad