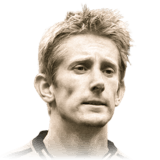 -
Sub out
Upcoming Matches
P. Chemistry
Squad chemistry
Reset
Basic
Wall
Shield
Cat
Glove
Comments
Reviews
0
/600
Update my avatar Dos and don'ts
Top Rated
New
Controversial
Show comments
Top Reviews
Only logged in users can submit a review
A review must be written in English
At least 200 characters are required.
Compare this player to other similar players you have used(optional).
If you import your club to FUTBIN or send us an image with the player data(fill the form below) your review will be marked as verified.
Include what you liked about the player in the pros area and what you disliked about the player in the cons area.
Your review will be manually checked during the next 24 hours.
Chem Style Used
Formations
Position
Rate Player Base Stats (1-10)
Pace
5
Shooting
5
Passing
5
Dribbling
5
Defending
5
Physicality
5
Most Used In:
Submit Review

If you are wondering if you should get Van der Sar or not in your icon swaps i think you should because he is a great goalkeeper he is not better than Ter Stegen because Ter stegen is just broken in this game but for 6 icon swap tokens in my opinion its worth it. Now that i added him into my squad im am having my best weeken league start ever!! i really recommend him.

-HE IS JUST A VERY GOOD GOALKEEPER

-His AI decisions making sometimes is weird specially in corners;

This card's overall legacy derived from FIFA 19 when he was the best keeper in the game. This game he definitely hasn't fulfilled what he did last year but is still a very good keeper. He makes extraordinary saves (ones which other keepers won't perform, a key thing to look out for) and is very trustworthy in goal. However, I feel like he is sometimes prone to mistakes, but I honestly believe that it's the game itself. For an easy 6 icon swaps, he is great for performance and linking reasons.

After completely losing interest in doing icon swaps objectives, I decided to settle for VDS for 6 tokens, which were still fairly easy to obtain with some squad battles and champs. I figured that at some point it will be useful to have an icon goalkeeper for chemistry reasons, and the strong link to the best CB in Fifa is of course nice to have. I've used VDS for the past weekend and can comfortably say that he is at least not worse than any other keeper I've used. Reviewing keepers is always difficult, because they are the only player on the pitch that is mainly controlled by the AI and their performance always seem to be quite random. Ter Stegen is widely considered the best keeper in Fifa 20, and I can't disagree having used him for the majority of this game. Oblak is the second best choice in my experience, but I also know people who prefer Alisson, De Gea and even Areola.

In my experience he is definitely not a bad goalkeeper, but he is not better than for example Ter Stegen either. For that reason it's difficult to justify the price if you buy him of the market, but I'd recommend taking him from swaps if you have 6 extra tokens.

First of all VDS has a huge figure in game. He has a great reach when diving which is great when facing power and finesse shots from outside the penalty box. He doesn't have the same kind of acrobatic jump dive that you get with someone like Ter Stegen, he just sort of falls down sideways and still manages to reach it somehow. If you move your keeper and wants him to have a great reach, VDS is your guy. He is actually alright with the ball as well, not on Edersons level but he can comfortably play a long pass with his feet, and the long throw trait is useful when starting counter attacks.

You would expect a 197cm tall icon keeper with "comes for crosses" trait to be dominating the box, but this was actually the area where he let me down. Sure he gets involved in the crosses and punches most of them away, but he has some weird habit of punching them in the worst direction possible. Same thing goes for rebounds, he may pull off a world class save but too often serves the opponent with rebound opportunities. I let in a few really unlucky rebound goals from the strangest of angles, just because VDS is simply too slow to get up and react.