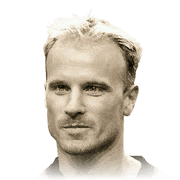 This guy is so good! As an Arsenal fan I felt I had to try him because of his price tag. He did not disappoint. Dennis Bergkamp feels silky smooth and quick on the ball even with the terrible gameplay! He finishes most of his chances and is the best passer I've used in Fifa 21 alongside De Bruyne. You have to try him if you're looking for a cam in this price range or you're an Arsenal fan. He will be in my team for a long time and will go on to be a club legend

-Finishing (He scores almost anything)

-Pace is average with a chem style

-Lack of versatility (Only play him cam because of pace)

I packed him in my Base Icon packs from swaps, and initially I thought it was a fat L cuz of his market value. But when I actually used him (with a hunter) I learnt quickly that his stats and price lie. No, he's not the quickest, no he doesn't have 90+ agility and balance, but he is a complete CAM/CF. He feels really good on the ball, able to change paths very well due to high ball control. Agile dribbling is quite good actually despite 79 agility. Passing is flawless, he can see the right passes with that high vision. He's not messing up and short passes, and long passing isn't bad at all too. His shooting really is unreal. With the hunter he can finish near post, far post, anywhere. Shot power is a massive lie, every time he shoots, it's a rocket. On top of that, he's got finesse shot, outside foot, and flair traits, with 4* 4. Surprisingly, he's really strong too. His ball retention is superb under pressure even from Van Dijk, Varane, and Gomez.

Even with a hunter max 86 pace, but if you're not completely into sweatiness it won't be an issue at all

Very disappointing card. I will start with the positives: he has excellent penalties, volleys and attacking position. However, overall base-icon Bergkamp has not endeared himself to me very well. His pace is bang average. Even with an engine, I find dribbling with him difficult and slow. Short passing is ok, but in terms of long passing, he was incredibly inaccurate. Physical stats are awful and he gets dispossessed very, very easily. The shooting is very, very inconsistent. On paper, it seems ok and there have been instances in which Bergkamp has scored some good goals, but most of the time he doesn't put the ball in the net. My main issue with Bergkamp is that no one stat or stats stand out. I own some icons which the community considers bad, such as Van Basten and Gattuso which have some stats which are insane (Van Basten's shooting, Gattuso's defending) but with baby Bergkamp, nothing really stands out, with the exception of penalties and volleys, but you don't use these very often.

Overall, this card has not impressed me at all. I don't like being negative about some icons because I feel that FIFA YouTubers and the community are overly harsh about their cards, but in this case the hate towards Bergkamp's base is fully justified in my opinion. EA have butchered another excellent real-life player.

. Dribbling is awful and he feels very clunky and slow

. Passing is very inconsistent but most of the time he is inaccurate

. Very bad physical, no strength means he gets thrown off the ball often