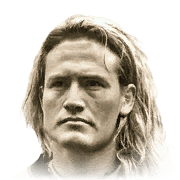 One of the best strikers I've used in this game

Can shoot from anywhere and scores

His close dribbling is incredible

Always in the right positions

3 star weak foot (doesn't matter that much though)

This guy is unexpectedly good...I completed his sbc because at the time I was in need of a decent striker and I completed him for only 50k - He is totally worth it!! My guy has an outrageous right foot and he is very quick. Until now no center back was able to catch up to him. He also has a beautiful outside of the box finesse shot and even though he only has 68 physicality, he looks very strong in game and knows how to protect the ball very well and has a very efficient close to the feet skils like the la croquetta for example. If you need pace and good finishing he is the man for you! Ofc you probably could get better players for his price, but he's a very fun card to play with.

Passing (sometimes fails to do some easy passes)

Thought I would do a short review, based on my experience with his loan card during friendlies in managerial masterpiece.

I didn't really expect much from this card and just chucked him because why not?

Usuaully my experience with friendlies is just long and annoying but with him I got 7 wins in 9 games. He's a pretty solid all round stiker. Not lights out but he will do everything you ask for him. I used him both in a two striker formation and a single striker formation and he excelled in both.

His passing is suprisingly good I would say mid-low 80's rather than 70's. He feels a bit stronger than his stats, there were times were I didn't expect him to get the ball trying to run through a defender but he managed to out-muscle them a fair amount of the time. He will convert most chances at worst get them on target/hit the post. I would expect him to do any worldie goals, he always manages to get rebounds aswell.

His dribbling is pretty nimble he doesn't have the "sticky" but he rarely loses the ball.

Defending. I'm guessing this is because of his Medium defensive workrate but he does actually fight to get the ball back in the attacking third if you lose it. He gets a few rebounds off the keeper like this and can help impede a counter-attack which is always a good help.

The only problems I found with his card was that his jumping and heading felt lower. It probably is because of his height but he wasn't really able to get himself onto any headers. Sometimes his workrates are a bit of a problem, idk why but there's times where I'm on a counter and he's lagging behind or even worse I'll be driving the ball forward and for some reason he will just stop running and then I have no support. On the flipside he does correct his position when he is offside pretty often but it was actually really annoying to be attacking and just see him stop running right next to me for no particular reason. It's not one of those he's ahead of you and he doesn't make the run, I will run past him with the ball and as soon as I do he will just stop moving and stay in midfield.

All in all he's just a pretty good stiker. He will do everything you ask of him pretty well, he won't carry you but he'll won't let you down.

Shooting (Although he doesn't have the finesse shot whip)

Stamina (Didn't really notice it that much)

3 WF (Honestly didn't even register this)

Heading (felt lower than it was but maybe this was me)