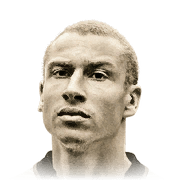 He's back and even better than last year (where he was one of the best baby legend strikers).

He's outshone any legend I have come up against so far.

He's a decent chunk of change but totally worth it IMO.

Finishing - The most consistent I've used so far (including griezmann, aguero, martial). Finesse, power, either foot, ends up in the net.

Jumping/Heading - As we know heading finally works after the mess of FIFA20. His jumping and heading are amazing, from corners he is comparable to Ramos (who is downright broken in the air)

Pace (I use Hunter) - Held off and outpaced Semedo from the halfway line and blasted it past the keeper in the last match I played.

Movement - Last year he made decent runs, but this year runs in general are better and he has improved in this area loads.

Larsson played as my second striker in a 4.2.2.2 beside Dembele. He scored 47 in 30 games and assisted 14 times with a Hunter slapped on him.

Pace 10/10 : This was a pleasant surprise for me since I was not expecting him to be that quick! but with a hunter he Does feel like 95+ pace! ran toe to toe with my delmbele!

Shooting 7/10 : i promised to keep thing real here! There's nothing wrong about his shooting , He scores all of those chances that your normal striker does too! Just that I didn't see Icon level finishing in 30 games , And i haven't had a "OMG how did he finish that" moment. Pretty underwhelming for a 400k icon tbh.

Passing 8/10: Nothing special here, He's decent. delivers all he should!

Dribbling 9/10 : now I've played with my share of dribblers this FIFA , and trust me when i tell you, his ball control and agile dribbling is quite something! he felt responsive and agile and i loved it!

Physical 8/10 : stamina was okay , had no issues , but he was pretty weak on the ball , now the reason i gave him 8/10 is because of the rebounds! the amount of unfair goals i scored with him because ball bounced right back to him was absurd. you hate to see it but it happens against you too , so...!

Overall , is he worth it?

well not really ,Even though i loved playing with him, He doesn't do much that a Mane/Rashford Can't do better! i think for the price you can do better!

Hes got the Sticky

Heading is Great! not crazy , but great!

Not as Clinical as expected

Vision was not the best

Was very disappointed when i packed him in my icon sbc, but then figured why not use him, and gotta say he has been unreal. He is surprisingly agile on the ball and movement is very good (with hunter chem). His finesse shot trait also comes in handy. Overall not a bad card at all and very usable.

His accelaration is top tier with hunter.

Finishing (very clinical inside the box).

Physicality - jumping was lacking and not strong in general

3 star skills - if you want to skill with ur striker he is gonna disappoint.