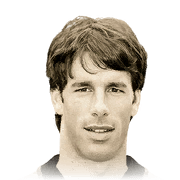 Whats up, Lads! My English is not the very best, pls excuse me.

This guy, Van Nistelrooy, is an absolute legend in real life.

He was a top scorer for Real Madrid and ManU, later he played at my Club, the almighty HSV! I luckily pulled a few expensive cards like Salah, Koulibaly, Wijnaldum, Havertz. So I could build up a strong team around a few meta players:

And in 10 games i played this squad, Ruud V.N. was absolutely amazing. (Scored 36 goals in 10 games, divion 3) He got sick finishing, tho his weak foot is not the best, he almost always is at the right spot at the right time, his pace boosted with a hunter is enough to outpace most defenders and he is very strong on the ball.

On many occasions he just yeeted the ball in, no matter where he was standing and although his weak foot is not amazing it does the job.

So all in all, for around 400k he is the best overall striker you can get...

but... dont expect wonders, its not a Ronaldo or Torres!

I would recommand trying him out, if u got the coins in your bag. But I wont be mad if u prefer a Pogba+Martial Combi for the same price.

Mid Nistelrooy was the first card that i bought, he was 212k and I had some expectations but not too much.

At first, his card stood out to me because he has some nice stats and I hate the meta way of playing, so put him in a team with Hazard ucl live and Arjen Robben.

Well, this is Ruud, Ruud can finish everything, head everything inside.

Ruud gives you power by taking your power away and just leave u with the shoot and run button.

Ruud loves you, he gives you a point of nostalgia when he scores for you

Ruud deflowers you, Ruud is the dad that you always wanted.

Ruud is that one cool uncle you have

Ruud is the one neighbour who is always chill with you

but u also have van Nistelrooy

van Nistelrooy is no skiller or not two legged

van Nistelrooy has no balance and agility

van Nistelrooy is dead after the 80th minute

But that's why Ruud is Ruud van Nistelrooy.

He is here to let you see that not everything can feel or see perfect, and then Ruud lets you feel what perfect is when he is in front of the goal

You have Malen, Robben and that Ajax Rightback now just go

dribbling isn't that bad it's okay

the pace is good but not meta

I picked up Ruud because I wanted to try something else. I don't like to play on the counter like everybody on this meta. of course, there were multiple options to choose from. However, I had a limited amount of money and untradeables in my club. I went for Ruud because I'm Dutch and a PSV fan. I played Ruud in different formations. I started off with him at striker in a 4231 formation. while using this formation, I didn't feel like he maximized his potential. he had to run too much. so I changed it to 4222. when using this formation a lot of options are available to utilize Ruud to his maximum potential. His stats are from the the 3rd weekend league games. I am a div 2 player who always stops with weekend league when reaching gold 3.

Ruud is great inside of the box. pass the ball to him and he will use his body to keep the defenders from the ball. however, when doing this you do need to turn and shoot fast. Otherwise, defenders will stalk him and you won't be able to run away from them. Besides his ability to turn and shoot he can also finess from outside of the box. when he has a bit of space the goalie won't know what happened to him. Finally, he has great positioning. So when you cross the ball Ruud will be there. Ruud will not hesitate and he will score. due to the fact, he has other stats instead of pace he can play against meta defenses. varane and gomes can struggle against Ruud when used correctly. of course, using Ruud like rashford or martial will be hopeless against varane. but when used as described above he is lethal.

Ruud also has his flaws. as you already could tell his positives always had something to do with scoring goals. while playing those 28 games he only had 8 assists. his passing is just bad. do not expect crosses or gallery play. just pass the ball to Ruud and he will score. do not pass the ball with Ruud.

overall I am positive about Ruud. Like I stated above his finishing is great and he has enough pace to play with. He does need to fit your playstyle. I wouldn't use him if you are a meta pace *****. i would recommend him if you want to enjoy FIFA and counter the meta pace *****.

Shooting, every shot with his right foot is a goal, he can score with his left foot but he wont be able to finess them in the far corner.