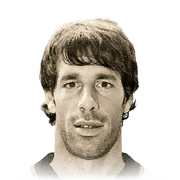 To put it simply he is the best finisher i've used in the game. I was really triggered when I got him from a base icon sbc, but he's proved his worth for me and is a key part of my team.

His finishing is rediculously good

When i got him Though he might be an OK Striker that could score me a few goals in Weekend League and Rivals but i was VERY WRONG. I played with him in 5 games of Rivals and he is the best shooter of the ball since Ahmed Musa 92 in FIFA 19. He can score from almost anywhere in the oppositions half and is almost immune to AI blocks. Eventhough his Pace, Passing and Ball control are quite poor his heading and shooting is immaculate and he dose not miss. I played him with Memphis Depay (86 inform) in a 4-1-2-1-2 wide and he was very good when he received through balls from Depay (inform). Overall a very good shooting striker, great number 9!

I recently packed Ruud Van Nistelrooy in my base icon pack, at first I was very annoyed and almost considered discarding him. However, after using him in the weekend league (finished elite 3), I realised he was a hidden gem. Slap a hunter on him and he turns into prime Ronaldo minus the dribbling. His shooting was tremendous and he scored from almost every angle even on his weaker 3* foot. I played him upfront with depay and he was only there to shoot, I made sure depay did all the work while Ruud finished it off. His stamina rarely had an impact on his game and with a hunter his pace was fine.