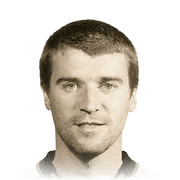 This SBC has received a lot more negativity than it should have done, Keane is a very solid player and by far the best cdm I've used on FUT this year. So to start off, his tackling is ridiculously good and he'll win the ball nearly every time. His AI movement alone will win you the ball back many times, as his defensive positioning and interceptions are both very good. His passing is amazing at any range, wouldn't try and do anything too risky with him on purpose though. His high stamina means he can keep up his classic intense defensive style for the duration of the match. His pace is everyone's main concern with this card, but honestly if you put a shadow on him then he has enough pace to keep up with anyone. For someone with only 70 agility he feels good on the ball. His shooting is nothing incredible, but for a defensive midfielder it is decent, he's got a good long shot on him and he can definitely ping them when needed. Overall he's a very solid player and the SBC is worth completing if you are looking for a cdm.

What a player. What a cdm.

A monster in defence. Keane is beast. He is speed man,Master passer,clinical long range shooter,Brave,but a bit clunky .

Totaly very good and he links defenders to attackers.

He is cheap and great.

a bit clunky just that

Roy Keane, where do i start. He wins every single tackle, and is surprisingly good on the ball. with shadow he can chase down most attackers, and his passing is faultless. if you are thinking about picking him up, he is 100% worth it. My favorite CM on the game.

Sometimes responsiveness on the ball