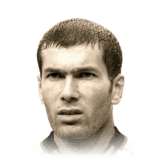 Well, today I packed Zizou from the mid/prime icon sbc pack and after some time of pure joy I came to this page to read some reviews about him. Surprisingly there was none so I decided to dedicate my first ever futbin review to this spectacular player.

Where should I start. I'm a gold 1/divison 1 player and I use him as a balanced central midfielder in 4-2-2-2 or 4-4-2 and he is literally reigning my midfield, but not just mine - he seizes the whole game. Once he gets the ball there is nothing you can't do with this guy, he feeds my attackers with exceptional precise "Umut-" passes and due to his 5 star skills, the high balanced dribbling and his good physicality in connection with the icon meta there are very little chances for any opponent player to get the ball. Even though he is quite tall and his agility stat is low, the 5 star skills make him feel very maneuverable and "wuselig". He's playing alongside prime Matthäus so I can enjoy to fully include him in every attack I launch. Once he's in front of the goal / around the box, the probability of a goal increases dramatically - (finesse-)shooting with his 5 star wf or playing the final pass is just awesome.

In addition to all of that, because I use shadow style on him he's defending very well, he steals the ball with no sense of humor most of the time.

I was lucky enough to pack toty penalty Bruno this year and compared to him Zidane is just waaay better. Thats obviously a matter of taste but in my eyes also the fun in gameplay is much higher with this nostalgic touch of Zizou.

After playing 10 games with him his med/med WR and his stamina are the only flaws I recognized. After 70/80 mins ingame, he starts to get a little sloppy in his defense tasks.

Here is my honest review. He is the best player i have used in this fifa, but he has cons to. Why the best? He is Tall, but not too tall. He has 5 weak foot. He has 5 skill moves. With Engine, he has 99 vision 99 short pass 99 long pass and 99 curve. Plus the curved shot trait. he is fast but too fast, the ok fast you need to play him cam or cm. His finishing, without any chemistry boost is PERFECT. I mean i think that 90 is short. He scores EVERYTHING. But he has cons too. He is a magician with the ball, but the agilily, thay stat in point is not that good. No, he is not Giroud or Alan Shearer but it is not mbappe, neymar, neres, etc etc.I mean, you cant drible as with them. And most players in this fifa love that. For a 25 years old fifa player who saw ZZ in real football is awesome . He can play PERFECT as CAM or as CM. I use both in game. He worths every coin. In 42 matches (30 Futchampions last week, 14 DR, he scored 50 goals and 35 assists) .