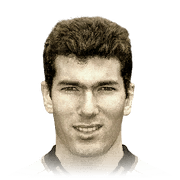 I was lucky enough to pack Zidane in icon pack, and obviously this guy goes straight into my squad. He is easily the best player in my team, I use him at CAM in a 4231 and he scores goals for fun. His shooting is class, dribbling is unreal and passing is a joke. This guy can play all over the pitch aswell as late into a game I will usual drop him into CDM, as his defending is still top tier, also because of his work rates and passing he still manages to be a serious threat from CDM. Best Card I've in Fifa.

So I packed Zidane from the base or mid icon pack and I was screaming. People said to use him at CM but you're not going to waste a 2 mil icon at CM come on. I played him with a hunter at CAM in a 41212 formation and he is amazing (what do you expect).110 goals in 100 games with 52 assists safe to say he's a crackin plurr mate.

Pace: with a hunter he feels so fast and easily able to break through the back line and latch onto a through ball to score.

Shooting: probably the best thing about this card is his shooting. With a nice boost from the hunter this guy finishes from everywhere on either foot with the 5 star weak foot. His finesse shots are cracked as you would expect and he has a rocket in both feet if you want to power it. His volleys and headers are also amazing and basically always go in Get this guy in a position to score and it's going in.

Passing: as you would expect his passing is amazing. He plays perfect through balls in his sleep and is able to do link up play with the strikers so so well to get one of the front 3 in a scoring position.

Dribbling: takes a little bit to get used to his dribbling as he is quite tall with not that high agility. But saying that only using a hunter chem style with no dribbling boost you can easily use that left stick to great effect once you get used to him and of course abuse his 5 star skills so his dribbling for me was still great.

Defending: an interesting one for me, having good interceptions and stand tackling often means that Zidane can grab the ball high up the pitch and create a chance, bearing in mind he's a CAM his defending is good.

Physical: the man's a bully. When he's driving the ball forward it is so hard to get the ball from him with his strength and aggression not to mention his big stock in game. This also helps him muscle players off the ball to regain possession. Also this guy always plays the full 90 with his good stamina.

Defending for a CAM

Agility but not a huge problem with his other stats

His trim is dead

Very expensive if you buy him

I've managed to pack this legend of a player in my base icon SBC (which I promised myself to never do again because I got back to back Lampard last year) and all I can say is WOW.

When I’ve first started using him I wasn’t sure where to put him, I was playing 4-2-3-1 and I found his agility, pace, shooting a bit low for CAM but I found his defending awareness also way too low for CDM and that was quite a big problem. I’ve tried most of the chemistry styles to make sure he would work in any of those positions like even guardian (huge boost in defending awareness) or artist for the +15 agility. Neither of them worked for me and I was quite upset, I felt like his dribbling was clumsy and he would never win a 1 on 1 tackle.

After trying him in a 4-4-2 with a solid defensive midfielder next to him it all started working out. I put him up next to Kanté which I put on to stay behind and the only instruction I gave him was to get into the box. The results are insane, he is always available and a great playmaker. His dribbling was something I had to get used to, in no way he is a De Jong that uses his dribbling and agility to create space. This guy creates the space by slowing the game down, giving a great pass, and when there is space I shoot so so many shots outside of the box (mind I’ve got 25 goals in 45 games, and the first 20 games I hardly scored because I had to get used to him). His defending with a shadow is still, a little bit disappointing but that’s no problem! Put a Kanté next to him and all you can do is attack and attack and let Kanté do it himself.

Going through the stats one by one:

His pace is good, with a shadow he feels quite fast. He is not an Mbappé but he can run out some defenders or fullbacks.

His dribbling is a weird one, it’s actually good but it’s just something you gotta get used to a little bit. Once you do that you start dribbling and skilling past your opponents like crazy.

His physical stats are quite good, he doesn’t feel like he runs too fast out of stamina (playing balanced both defensive and attacking with a depth of 6). He isn’t too aggressive but he is quite hard to push of the ball.

His shooting is probably the best part of the card, you really don’t need to boost those stats. His finishing is good for a midfielder but not like a FIFA 19 Ben Yedder but his longshots are really what it’s all about. Don’t you dare giving the pass when you have space, R1 shoot that shit in the top bin.

His defending is quite poor for a midfielder. Even with a shadow/guardian/anchor/sentinel it just isn’t enough. He intercepts a ball a couple times a game and he might win like 2-3 one on one tackles for me but it just isn’t enough. Pair him with a really good CDM because otherwise, your defense will be falling apart like the Roman Empire.

Would I pay the coins for it myself if he wasn’t untradeable? No, his price tag is really overpriced in my opinion. If his defensive awareness was a little bit better I’m sure he would be but the fact that he is over 2.500.000 right now just seems insane to me. But if you got the coins he is sure worth a try!