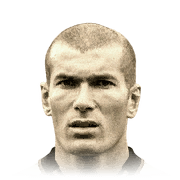 I will keep this review short. If you have any questions please write them below. For reference, I am a div 1 player. All games has been in Div 1. I have not yet tried him in WL.

He got that icon presence and he finds passes even I didn't think of. He can bend passes around players and into spaces in a way that I have not experienced with any other player in the game, de Bruyne and Messi are not even close. Passing is really his outstanding attribute. He can find open space with both feet and deliver it exactly where you want it. Doesn't matter if the forward wants it on the run or standing stil, he will make that pass. He is really godly in this area.

He also has a sublime shot with both feet thanks to his 5 star weak foot. Finess shots are really his thing and he has scored some amazing ones. In addition he can power shoot as well.

To be honest, you should not expect him to dribble like Neymar. He is somewhat fluid but sometimes a bit stiff when dribbling. It took me some games to get use to. However, with his physical presence and his 5* 5 * he can still dribble pass his man and run towards goal or find space for a pass. I stil rate him highly is this regard. He gets control of the ball instantly and is always a threat when going on a dribble run. Don't be afraid to dribble with him, just don't overdo it.

He is strong and can hold his own, however he is no beast like koubially or Van dijk. You can feel he got power as he wins headers and duels but don't expect wonders here. He does last all 90 minutes for me. Not a problem.

He is good. He can play the part of CM but he doesn't pick up/win lose balls as well as for example Kante.

Great card, I would even say Amazing. I absolutely love this card. I previously tried pele 91 and Eusebio 91 and for me Zidane brings more to the table as I play a lot from the midfield. I need someone to feed my attackers and Zizou plays this part to perfection. His presence is really felt and he has won me several tight games already. I usually drive the ball up field with him, takes on the defender and then go for a pass. When you get an the opportunity to shoot, go for it. He really got a cannon.

I played him with a shadow as CM in div 1.

So I used this guy in 442 and 4231 as second CM/CDM with Shadow next to a more defensive midfielder like Kante/Valverde and I think I can offer my review after playing with him for more than 70 games. For the record I'm D1 2340 sr and Elite 2 in FUT Champions, not the best but I think that should be enough to review

Pace - 8/10 nothing wrong with his pace for a midfielder, he won't outpace defenders but he's so strong and has good enough pace to not lose the momentum of the attack or to track back and defend when needed.

Shooting - 10/10 Finesse shot trait, 5* weakfoot and 90 shooting? How can this be anything other than a 10. Nothing to say here, he shoots bullets and I don't even have a chem style that boosts it. Finesse shots, power shots across keeper, chip shots, he can do them all and do them well. If he makes a later run into the box just take the shot, he will finish as good as any poacher

Passing - 10/10 This guy passing is phenomenal, I played passes with Zizou that I thought would get intercepted but they were 40 yard through balls with pinpoint accuracy sending Neymar 1on1 against the keeper on multiple occasions. 40 yards lobbed through balls to the wingers? No problem for Zizou. That's how good his passing is. His free kicks are also one of the best, I scored a few and let's just say if you know the technique for free kicks this guy is guaranteed goal. If your Zidane misplaces a 2 yard pass just know that's the game screwing you over and doesn't matter who you have there, it's nothing to do with your Zidane.

Dribbling - 8.5/10 He has good dribbling but isn't agile, gets good speed boost from stepovers and other skill moves and he can do 5* skill moves but don't expect him to turn like Bruno. His dribbling is very similar to Cr7 in that regard. His skill moves get good speed boost and you will have to do them to compensate for his lack of agility. In heavy gameplay he's like CR7, you won't be able to turn quickly left to right and will have to either pass it off/shoot or do a skill move

Defending - 7.5/10 He is not a Blanc or Renato but he still does his fair job. One thing I'll mention is he feels heavy when jockeying left and right in circles this is because of low defensive awareness but he compensates that with his high strength and good enough standing tackle/interceptions. Sometimes he also won't stick a leg out to intercept the ball because of 72 aggression but if you pair him with a Kante his defending will become 8/10 as the less jockeying he has to do the better he is.

Physical - 8/10 Zizou is ridiculously strong, one of the strongest players in the game and he feels like that but Physicals is not just strength, his aggression is pretty low but it's not bad and his stamina at 81 is low if you want to take advantage of his runs into the box or pass the ball to him and dribble. If you don't dribble much with him and use Stay Back while Attacking he can last you whole 90 minutes because he has M/M workrates so he would lose less stamina compared to someone with H/H, but if you want to take advantage of his offensive qualities he will be tired at around 75th/80th min. He's still playable because he has high stats to start with that's what I would say.

After pulling baby Trezeguet, I've got really lucky and got this man from base/mid icon upgrade. I was really hyped at the moment but then, but then I began to think where to put him on the pitch. I was playing 4-4-2 at the moment, so after reading some of the reviews and watching some videos, I started playing him as a CM next to Blanc. He was ok there, but I have to be honest, M/M workrates are not the best for CM in 4-4-2. I noticed that most of the time, he was just staying still and not helping in attack or defense. He had a Shadow applied, but it's wasn't good enough for me.

So the next step was to try him as a second striker with false 9 instructions applied. And after a few matches, it still wasn't the best for me.

Please don't get me wrong, he was ok in both positions, but it feels like 2.6 kk player should perform much better.

That's why I decided to switch my formation to 4-2-3-1 and play him as a central CAM with hunter and OMG, he is just a god there. Let's jump in and explore his main attributes.

Just amazing, he is the best passer, that I've used this year and I have a feeling that he is definitely in top 5 in the whole game. The direction and the power is just perfect. He can perform really tough passes, which you wouldn't dare to do with another player.

He scores a lot of goals for me with both feet and I feel that he is the only player, that can constantly hit longshots.

You will need to get used to his model, but he has a good ball control and his physicality also helps a lot.

He is not the fastest player, but with hunter he has the perfect pace for CAM or CM

He can make interceptions but it will happen really rare, and you will have to control him, AI didn't make a single interception for Zidane during 10 matches played. I also need to note that his model is not super responsive, so it will be tough jockeying with him.

He feels strong and definitely can compete for the ball. The only thing that is not great here is his stamina. He can play 90 minutes, but then you'll need to change him.

I was lucky to see his real life perfomances and for me this man is a legend, I know that many people were admiring him back then, so if you really want to try him, I recommend you to use him as a CAM, because in other positions he doesn't feels like Zizou that we remember and to be honest it will be a waste of coins.