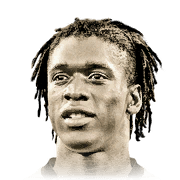 First of all, this is my first review on Futbin but I will try my best :)

Im playing this card since the first week of FIFA 21 and had the luck to buy him for around one million coins which is cheap compared to his price now. I have used him with a shadow chemistry style mostly as a CDM in a 4-2-3-1 formation.

By now i have played more than 350 games with him and he was incredible.

He scored 52 goals which is a lot for a CDM because he only rarely moves up front. When he gets into a shooting position though his finishing is incredible and he rarely misses an opportunity. It also does not matter which foot he uses because his 4* weakfoot do feel like 5*. His longshots almost never hit the target because they get blocked but if they do hit the target they mostly hit the back of the net bacause of his 93 shot power.

Whe it comes to passing the ball to the attackers he did a great job for me and his 4* weakfoot does help here again. He also stays very composed when being attacked by a defender.

His dribbling sometimes felt a bit sluggish which might be due to his lack of agility. I often used R1 dribbling and he felt a bit slow doing that. His ball control though is very good and he almost never loses the ball which is also made possible by his 87 composure which you can feel ingame. His 4* skill moves do help in creating space and chances to shoot around the box.

Now to his defending which seemed a little bit low to me because i felt a bit unsecure in using him as a CDM but he turned out to be an absolute monster when it comes to tackling and winning the ball in the middle of the pitch. He feels like a wall in midfield and is able to catch around 90% of all passes when holding L2. His interceptions are great and his standing tackles are an almost guaranteed ball lose for the opponent. His sliding tackles do lack a bit which can be the case because of his small size of only 176cm. His size also comes in play when he is forced to go into a heading duel. His 78 juming do not help a lot in this case.

His pace is unbelieveable. He sometimes runs across the pitch like Mbappé on crack which makes him able to catch some of the fastes players in game.

His 86 strength feel like 95 and he rarely loses a fight over the ball. His strength in combination with his pace makes him very strong when it comes to running witch the ball. His 92 stamina are also very important and makes him able to run across the pitch with topspeed even in the 90th. minute.

What else can I say about this absolute midfield tank engine? He is fast, he wins the ball for you and he scores when he gets a chance to do so. If you have the coins to buy then you know what to do. Im looking forward to playing this card for the next months and hope that some of you will have the same experience that I had, playing this card.

Let me say this off the bat: the in-game hair style makes whatever amount you pay for this card worth it. All jokes aside, like my title says, this is the best CM in the game, and still holds his own well into February now and into March. Anything you ask of this guy he will do, no questions asked.