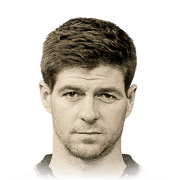 All round quality card, he can be a bit slow but if you get within shooting distance he will score 8/10 he has his own shooting animation and hits the ball with huge amounts of power.

On the Ball Movement

Stevie G was one of the main reasons behind me falling in love with football so many years ago. Needless to say unlike most others that packed him in Icon Swaps, I was pleased to see this legend join my club. I was a bit hesitant to include him in my WL squad and initially thought he would slot in the squad during the latter stages of my Div Rivals matches (I am a Gold 1, Div 1 Player with a 2100 skill rating). After packing an untradeable Kante along with completing a few SBC's, I found myself needing an Icon to link my squad together. It was in this moment that Captain Fantastic was released. Stevie G is not going to wow you with skillful runs, his pace is adequate, and at times he can seem "clunky" when compared to the roadrunner meta at this stage in the game. HOWEVER, Stevie G was not build for the "FIFA 21 META". If use correctly this guy is an absolute force in the midfield, and if you have read this far then I am delighted to tell you why...

*SQUAD DISCLAIMER* In game formation is a 4-2-3-1(2) with an unchanged backline, Gerrard at LCDM, Kante at RCDM, Nedved at RCAM, Dybala at CAM, Robben at LCAM, and CR7 at the striker spot

Pace: As previously mentioned, this is nothing to write home about. With a Shadow Chem style in a CDM position you will find he is fast enough to put a shift in. His transitioning speed and lateral movement is solid, and paired with his defensive abilities he can defend most meta players if you are a decent enough manual defender. (7/10)

Shooting: Excellent. He doesn't score often and that is largely due to my conservative style of play with my CDMS, but when he shoots they stay struck. No player in my FIFA 21 career has scored more bar-down bangers from outside of the box than Stevie G. In his LCDM spot a right footed finesse will find its way into the top corner more times than not (assuming the plague of auto-blocks is at bay) (8/10)

Passing: A DREAM. This is what stood out to me first with Gerrard's card.. This man's passing traits along with his in game states were a delight. From the CDM spot he can play literally any pass you ask of him. Whether it's a 10yd through ball in the attacking third, or a raking 50yd crossfield ball to a pacey winger, Stevie G will deliver. At times his 3 star weak foot would bungle the occasional pass, but this was hardly noticeable. Side note, if this man is in your squad PLEASE have him take your corners, you will not regret it. I was never one for scoring corners, even with the likes of moments Dybala, 86 Carrasco, and 89 Nedved in the squad who also have wonderful crossing stats. For whatever reason, Gerrard's corners = goals more than any other player I have used (10/10)

Dribbling: Adequate, as long as you are not going on skill runs with this man then you should be just fine. In tight situations his 1-2 passing ability is enough to relieve pressure, and his ball control along with his strength help him feel stickier than his stats dribbling stats would suggest. (7/10)

Defending: Solid. Stevie G can put in a tackle. His 6 foot frame allows for great reach in the midfield when coming up against shifty opposition. The run and jockey tactic has worked excellently for him, and truly I have had no issues with this part of his game - especially with a Shadow. He has crunching tackles that result in counter attacks. (8.5/10)

Physical: Mixed Feelings. The one thing about this card that irks me is his stamina. 77 is adequate, but in tight games I find myself subbing him off in the 65th minute or so for Duncan or someone of the like. When this guy's stamina is not drained he is a total force in the midfield. His strength, aggression, and jumping all appear to be much better than his stats would suggest, it is just that pesky Stamina that will come to but you in the rear late in WL matches. (7.5/10)

Are there better attackers in the game? yes. Better defenders? yes. However, given the icon links and the entire package that is Stevie G, 350-400k is a wonderful price for such a complete player.

I got Baby Stevie G in my base/ mid icon pack. I was disappointed but then looking at his card I thought he could be decent. That's all he is. Decent.

He's a Jack of all trades master of none. He sits in a 3 man midfield with baby Seedorf and Kante and he just about does enough to not stick out like a sore thumb but he's clearly the weakest out of the 3. His pace is not terrible with a shadow but he feels slow turning and nothing special In tackles.

I thought his shooting would really make up for this but he just does not score very much for me and when he does its not spectacular. He cannot finesse which is really disappointing as I use that a lot.

He's just about decent enough to keep in my team (87 rated) but if it wasn't for his strong link to Tavernier I would really consider getting rid of him.

If you get him in an icon pack he's worth a go but I would not recommend buying him at all.

-Good enough in a midfield 3

-Jack of all trades, master of none