SANDRO TONALI - ONES TO WATCH 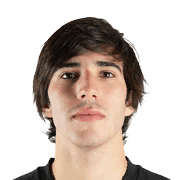 Sandro Tonali's OTW. Cheap, did him for close to nothing, but hesitated in submitting since he showed up as a loan. When I submitted the SBC and put him in my squad, he was, thankfully, NOT A LOAN. I am putting these words in capitals since I recommend this card a lot. Playing him CDM in a 4-1-2-1-2 Wide, he just mops up play. Rogue passes? Tonali intercepts. Heavy touch (I'm looking at you, Big Romelu)? Tonali dispossesses you. 1 vs 1? He will almost definitely put in a crunching tackle, whether it (almost always) wins the ball or not. He also has a decent shot on him, and can score a few, but it will usually be saved, or go over the bar. I also used him in a 4-2-3-1 wide with an offensive CDM next to him, and he was the same player. He can also play CM, but make sure he is not attacking a lot as he will waste a lot of good chances. Also don't go on mazy runs or long dribbles with him, he will probably lose the ball.

If you can do him for under 5k, do him. He is a brilliant card on his own for about a month, and with one or two in-form cards, he will be even better.

I used an engine on him for a pace, passing, and dribbling boost, which I felt he needed, especially the dribbling.

This card only costs 8k . But too me I really don't think he will get that much informs ( but if he does he will be 80+ rated which is good ) . Not the best card but you can use him for SBC folders . Slap an anchor and he would be perfect .