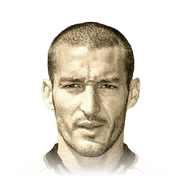 First of all, I just want to put it out there that I packed this guy from a normal megapack. Untradeable though. Have played roughly 100 games with him and I am finally confident in writing this review after my experiences. Note that I've tried almost all rightbacks in the game (semedo, walker, rulebreaker Mukiele etc), except for a few costly special cards.

I'd like to begin with saying that, while writing this review, his price is 1M which I consider quite high for investing in an RB. But, I will not base my review on what he costs since many people actually has 1M but I still find the thought quite odd to invest in an RB when you can put that money into someone upfront.

I play in-game 4231 and tend to use my fullbacks often running down the wings to create space. In the final third I usually play quite possession-based so Zambrotta fits quite perfectly with his 5* WF. One of the main reasons I play Mendy on LB as well (5* WF). The best stat on this card is his aggression, where he will win you balls back easily. Bullying players like Rashford and Haaland. Even though his strength is not that high he feels like a bulldog with that aggression and defending stats. Literally a bulldog running around and winning back the ball, almost, note almost, like a Kante on RB. Have tried different chemstyles and found that Catalyst seems to be best, his DEF and PHY doesn't really need that boost and honestly I didn't feel that big of a change with other chem styles. I'd like to boost pace and passing since I play a possession based style.

For reference I am in Div.1 and a regular Gold 1 player.

Great pace, his small character makes him feel fast. I would say that 90pace is just right about it. (Mukiele for instance who is taller does not seem true to his pace on the card)

Actually surprisingly good. Dont get me wrong, it is not good compared to attacking players but for a fullback it is good! I have scored a few goals, some longshots and some tap-ins. Long-shots are somewhat OK for only having 81.

Passing is excellent, combined with 5* WF. A dream!

Obviously not the most important stat, but it is slept on by many players. A fullback that is able to be get out of tight situations or get past one opponent is huge. With 4* skills Zambrotta does the job.

One word: BEAST. If is in a challenge, there is a 97% chance that he will go out through that challenge with the ball. Just simply incredible. If heading is counted as defending it would be a 8-9/10, obviously because he is short and doesn't win a shit for headers.

Best stat here is aggression. As i wrote, a pure bulldog running around winning the ball back. 90 stamina helps him to not get tired even in extra time. Could have more strength, but not very noticeable. Sometimes trying to catch up to defenders they can sholder him off. But if it's in an actual challenge that is messy, he wins the ball almost all the time.

If he had High/High workrates and slightly more strenght I would consider giving him a 10/10. But because of his workrates he sometimes (not often, but sometimes) is gone in the position I want him while defending. Through-balls are OP in this meta and if a fullback is not fully tracking back the wings will be exploited. Just bare in mind having him on stay back while attacking, but even then occasinally he is running down the opponent lines. I'm so glad that I packed him and yes he is miles better than Semedo, Mukiele and Walker. Only drawbacks are height, workrates and length. If this makes any sense: he is quite similar to Mendy (both have 5* WF), feels just as the same pace, but everything else is pretty much better.

Thanks for reading this review and for the records i'll just put the date of me writing this review here 22/12/20. Don't know why. Don't ask. Price at this date 1m.

Feels just as fast as Mendy, shooting surprisingly good for a fullback, passing good, 5*WF a f*ing wet dream, enough skills to get past opponents, defending godlike, physicality like a bulldog.

Price? 1M is quite much and you should be spending it on CR7, Neymar, Mbappe or whatever, if you have the chance. If you have the money, by all means buy this guy he will be a good addition to your team. Nothing ground-breaking though, but what to expect from a RB...