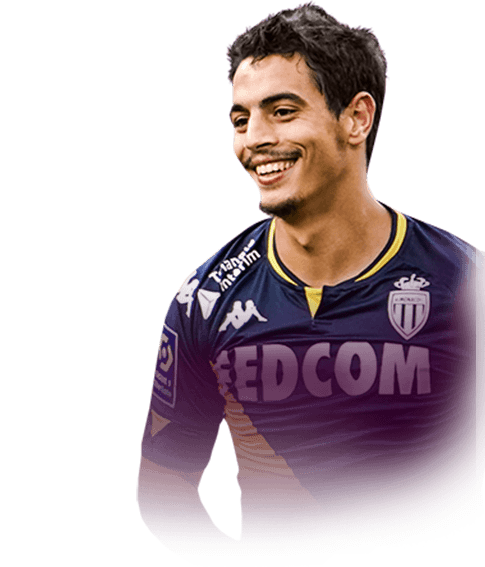 This week we are back with the headliner of the Headliners Promo, none other than the Rat King himself... Wissam Ben Yedder.  Perhaps one of the biggest surprises for me in FIFA 21 was the lack of dominance with the various Ben Yedder cards.  I truthfully thought it was game over when the 86 IF dropped at the end of September, but in reality, this is a card I seldom come up against in opponent’s squads.  For me, FIFA 21 Ben Yedder cards just don’t have that “it” factor anymore and can no longer take over a match and win games single-handedly like in FIFA 20.  Honestly, it is why this card was a must-review for me; I had to see for myself if the controller crusher was back in full effect… or still, a watered down version of the FIFA 20 marvel.  It was immediately clear that the HUNTER chemistry style would mesh best with the already existing base statistics… before throwing Ben Yedder up top to lead  the line all weekend in the following squad: 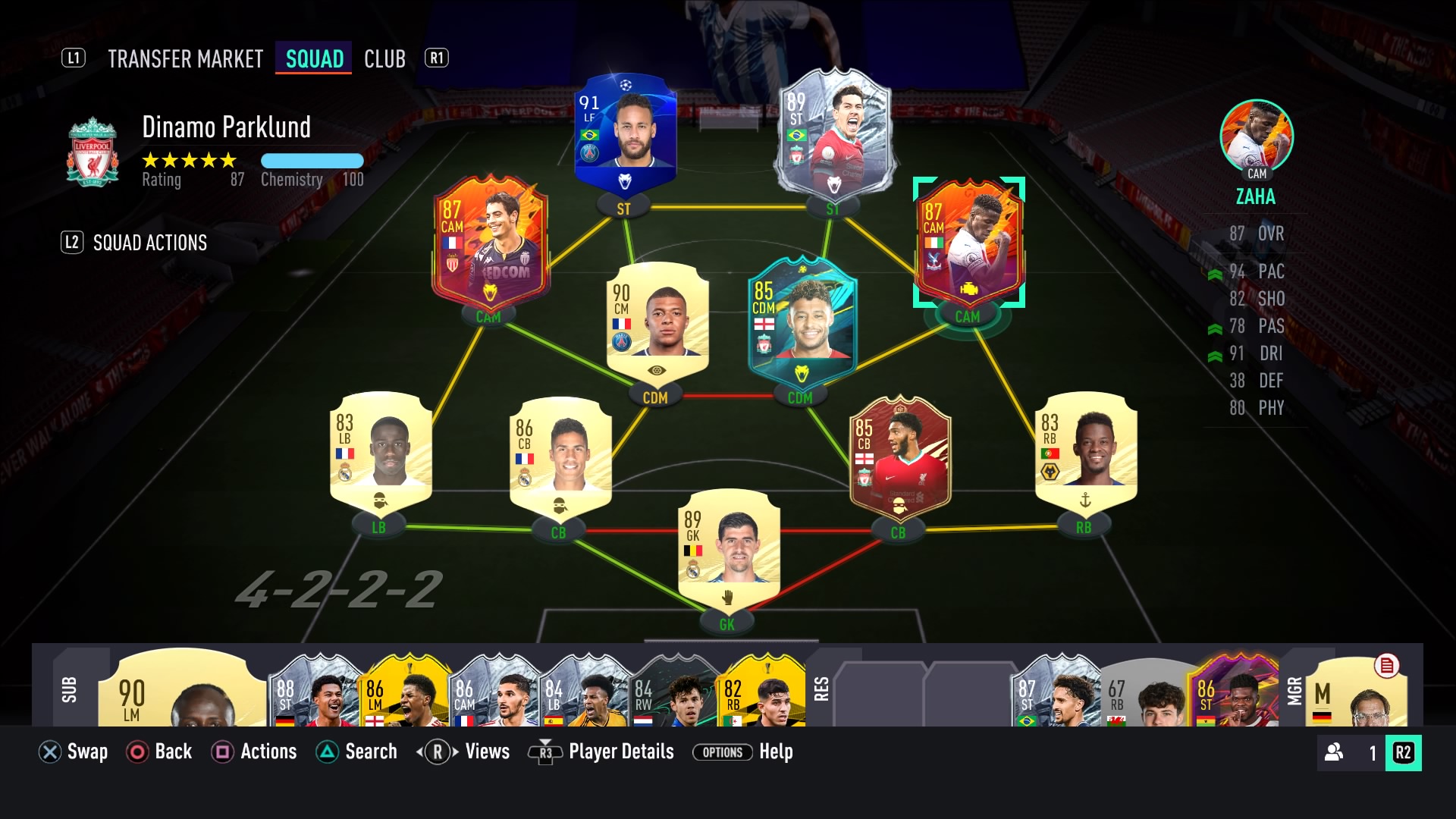 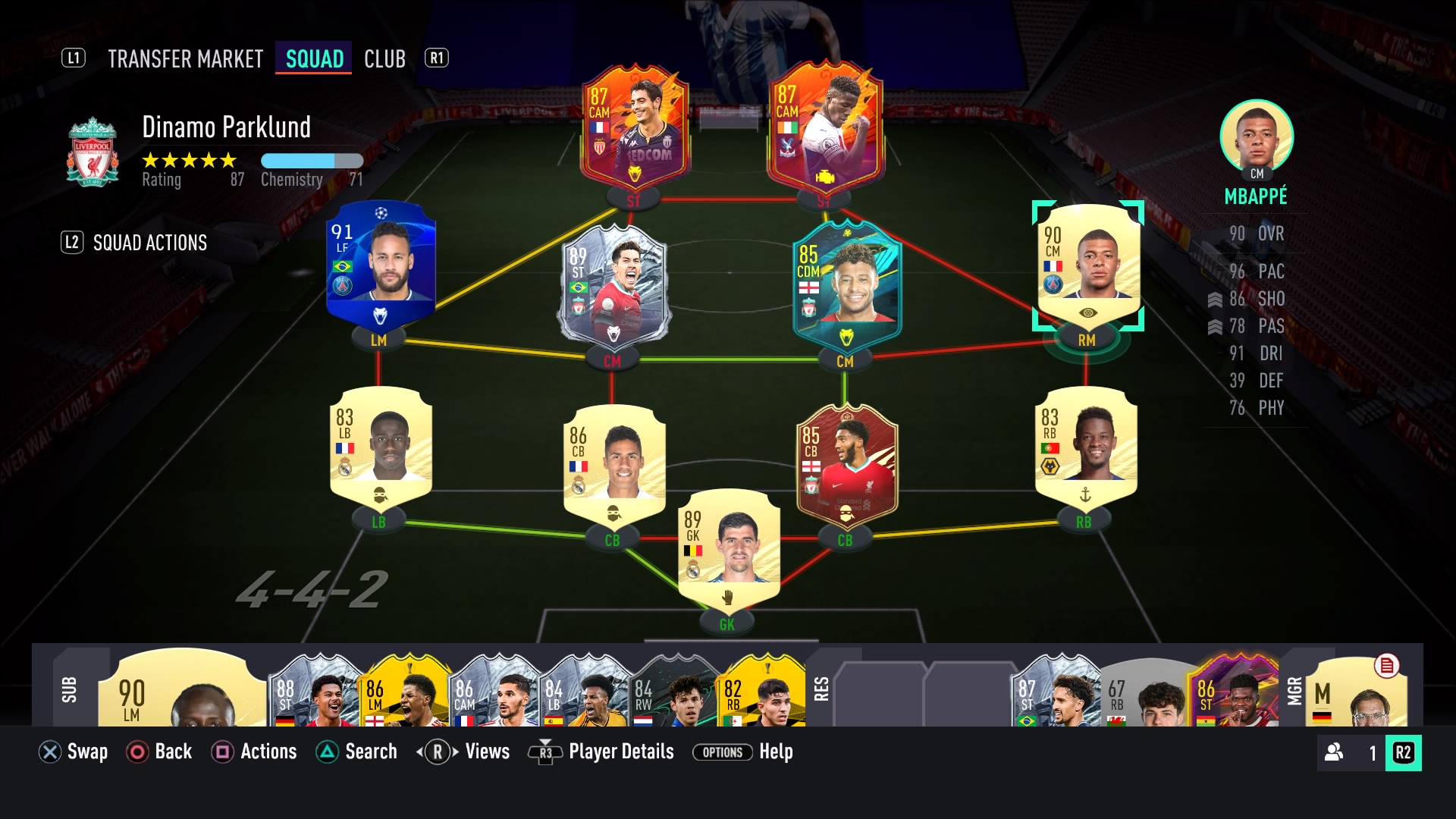 The verdict?  This card is slowly working its way back to being the Weekend League menace he was a year ago… but he is not quite there yet.  However, it is undeniable that this card felt much improved on the 86 IF and has the potential to be upgraded in the relatively near future.  To start with, the pace and dribbling are back with this card and feel better than ever.  99 ACCELERATION & 95 SPRINT SPEED felt quick and devastating on the counter-attack… the bridge gap skill launching Ben Yedder into channels of space with brilliant effect.  When the spaces were closed down by Drop Back Danny the 94 AGILITY & 92 BALANCE provided opportunities to wriggle into shooting positions within tight spaces.  Of course, the 4 STAR SKILLS are also available as Ben Yedder felt responsive and sharp on the ball all weekend long.

It just had to be, didn’t it?  Realistically this is always going to be the main draw with this card and overall he delivered across the 20 matches.  28 goals felt like a decent return in a weekend where I struggled to find goals throughout.  At one point in the review, I remember feeling some frustration with the fact that Ben Yedder let some chances pass him by… but a look at the remainder of the squad was a solid reminder that in general goals were difficult to come by this weekend.  Is it just me, or did it feel like the AI blocking was on a completely different level of intense this weekend?  I cannot believe the amount of clear cut chances that were blocked by a ridiculous slide tackle from behind, wrapping the foot around the ball, absolutely insane timing auto-blocks.  So, with that all taken into consideration, the goal total was an impressive one and was a testament to the Shooting statistics with this card.  99 FINISHING, 92 SHOT POWER & 99 VOLLEYS combining with the 5 STAR WEAK FOOT to create a very potent and clinical finisher overall.

The fact that this card is “Live” creates a dynamic that has to be considered when purchasing.  With Monaco playing Wednesday and then again on Saturday there is a real chance to get off to a flying start towards an upgrade.  Also, it is worth keeping in mind that Ben Yedder has embraced his status as a FIFA warrior and no doubt will be trying to add to his collection of hilarious tweets come Saturday especially. The potential for a January 23 upgrade places this card in the realm of “must watch” in the coming weeks for sure.  Keep in mind though that Monaco will be playing a lot of clubs immediately around them in the table… and then there is Marseille in the fourth game slot.  Finally, it is worth looking at the run of games after Marseille… as Monaco play the who's who of the bottom feeders in the four matches after Marseille… before a trip to PSG.  With all that said it would appear that there is some serious potential for the 4 match upgrade between now and February 14 … and again, I truly feel that this card is an upgrade or two away from being completely cracked in-game, we shall wait and see if it pans out in the end.

Having reviewed a nice collection of million coin players lately I feel like Ben Yedder can more than hold his own.  The 5 STAR WEAK FOOT is so vital at this stage in the game and added a real threat in attack this weekend.  The links are great, the card is great, and the potential for the upgrades is there… creating a situation where this card has the opportunity to once again contribute to global controller sales.

When you look at a card of this quality, with the upgrade potential, and only see a price tag of 950k it does tell you something.  In FIFA 20 the most frustrating aspects of defending Ben Yedder was his crazy unexpected strength on the ball… and the fact that he finished everything from everywhere.  In FIFA 21 there have been some changes.  The 67 STRENGTH for instance… feels exactly as it should and Ben Yedder is relatively easy to dispossess in the tackle.  170 cm | 5’7 goes a long way to adding Pace and Dribbling but goes absolutely nowhere in the Physical department.  Secondly, the finishing that was so potent in FIFA 20 has not translated as flawlessly in FIFA 21.  Don’t get me wrong, he can be clinical and was throughout the review… but he did not finish EVERYTHING, and if you did not play FIFA 20 then you will have been spared by the pain I am re-experiencing with the other readers at the memory of this card in an opponent’s squad in the past.

This one is tough.  Truthfully I am surprised at how low this card has dropped since the Headliners were announced.  While I sold long ago to move on with my squad, I did take a loss from the start of my review until the end.  950k is quite high for the quality of the card alone… 600-700k is more what I would suggest is appropriate based on comparables.  But of course, the gamble comes into play at the potential we are dealing with here.  Ultimately that is what drives my recommendation with this card.  If you like to gamble, this card is for you.  The quality just about lives up to the price tag and then you have the potential upgrades to really have a world beater card on your hands.  However, if you strictly want value for coins then this card doesn’t quite live up to the price tag in the end.  Hoping you are safe and well. Cheers for reading. 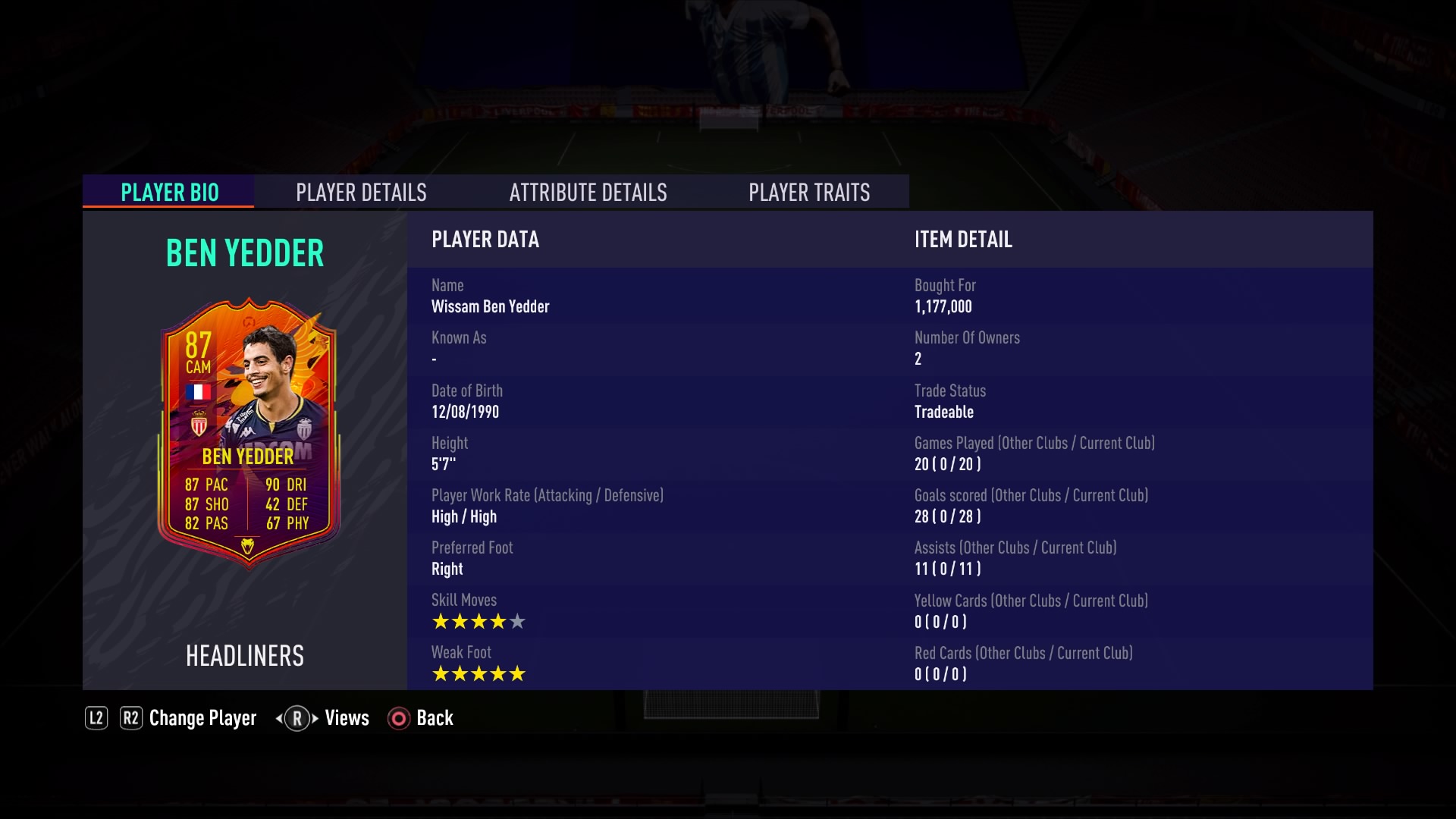 It's Ben Yedder so just wait for him to get in behind then press through ball button and shoot for easy Ws.

The 5* WF really shows when you shoot with his left foot.

Previously I used TOTGS Gomez and Mertens. Both have smooth dribbling, shooting, passing, etc. but attacking is a whole new level when I upgraded to this card (and Mbappe).

Good passing stats so I can cut back with ease.

His stamina is low so I recommend setting his instructions to Stay Forward and don't chase with him.

So it's Ben Yedder. I always hated playing this guy last year but when I saw this I thought I'd join the dark side and my word was it worth it. He is just a cheat code. I know I'll be scoring goals with this man. I've played 72 games and he's bagged 125 with 43 assists. I'm a div.3/gold 2 player so I'm not a goat but he makes me feel like one. Everything just becomes effortless when he's on the ball, super agile, quick and of course 5* WF all combined with his unreal finishing ability to become a monster. I partner him with Mbappe and they work so well together. My opponent usually marks out one player and the other guy is through every single time, a couple of through balls and you're away and he just doesn't seem to miss ANYTHING. I can't recommend anyone else for this price range if you can afford him it's got to be done. His stamina is the only small weakness and over 120 min regardless of tactics he will tire but hopefully he's already done the job by the time it gets that far, which is usually the case. He's the first guy this year I thought wow I actually love this card and he isn't going anywhere soon. I usually try as many cards as I can but I know Wissam will be sticking around for a long time. GAME CHANGER!

Finishing is the best I've experienced this year

Penalties always go in no matter what

Passing and link up play

Alternatives are a lot more expensive

Price for some players but alternatives are way more

This guy is just not worth the price. Absolute day light robbery of my coins through tax. He runs like my grandma that just came out of the ICU, camouflages with the grass as we can't even see him on the pitch, don't feel as good as last year. Please do not waste your time. put a hunter on him I guess and probably play him at strike. He anyways feels like if you used a small mertesacker at strike. Passing was quite nice tho.