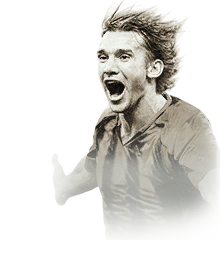 Premises, I'm an Elite 3 Player every week so trust my words.

Since I tried tons of players wanted to use logic and find underrated players tht match with the body type and skills of this patch perfectly.

I was concious that Shevchenko in the past Fifas was really "meh", but this year had the idea of give him a try since I play with Lewandowski TOTY and looking at Sheva's stats was pretty similar considering also the body type and how it feels in game.

Yeah exactly, Shevchenko Moments feels like Lewandowski TOTY in game! Finished Elite 3 this WL and Sheva was top scorer with 42 goals and Lewandowski was 2nd with 38.

If you have money to buy a striker like this and need for the next WL, do it! You wont regret it trust me!

As written on my TOTS Trippier review, i first was frustrated about me packing shevchenko (in the 92+ att/mid icon swaps pack).

I do not have a personal link to the player he was in reallife, nor do i have any particular sympaties to AC Milan to be honest.

I play him as a lone striker in a 4231 narrow. and I normally do not play 'really fast' players on the wing / at striker as i prefer a passing/ defensive style of play.

i personally would not label him as an "OP beast" - or a "meta player" - since he really is "not fast enough", doesnt have the 5* WF or similar skill moves.

but - why do i like him, eventho he is no "outstanding card"?

he does not have a really good stamina - and because of that is alot of times fatigued after 75-80 min.

his left foot is not perfect. the 4* WF sometimes feels like 3* or even 2* - but only sometimes.

with my moments nedv?d at c-cam he has a good partner that that gives him alot of chances to get either inside the box - or a decent shooting range - in which he almost never misses.

the 3* skills do not hurt me alot. his heel-chops are really really good and let me get past alot of fast and bulky CB.

he feels really good on the ball, can give good short - and "middle-range" passes to wingers and also has a really, really good att. positioning to get the ball back from the midfielders.

as i said before - in front of the goal he is very clinical. he almost never misses. ("but when he has a bad game, its better to sub him off for a 5*WF striker")

He is really, really fun to play.

I would recommend him to FUT-players which want a "cheaper", clinical striker - or people which just search a new option up top.

He is, as i said, not the fastest - but really gets his job done with the shots he takes.

He is not meta - and i guess his set price (283k at the moment of the review (on PS)) is also pointing it out.

I would NOT play him as a super sub aswell, since he sometimes seems invisible on the pitch (for a long period of a game).

*I did not test out his heading-skills but of what i have seen in other reviews on youtube, he seems to be really good there aswell.

Ok so, hello again, I am back again with my second review, this time I picked up Shevchenko Moments

In my opinion, he is underrated cuz he s got 3 sm and maybe you think 83 agility and 80 balance isn't enough for a striker.

Well, I have to say that you are wrong, cuz he feels way better than that, you can quickly turn, and make 1-2 passes without any problem with him.

Pace - I got him with a hunter and I have to say he is fast enough to get rid of defenders, and even with trough balls, he can deal with that

Shooting - OH MYY, I HAVE TO SAY THAT EVERY SINGLE SHOT ON TARGET IS A GOAL, HIS FINESSE SHOT IS AMAZING, AND EVEN WITH FREE KICK HE CAN SCORE EASILY

LEFT FOOT, RIGHT FOOT DOESN'T MATTER ALWAYS HE WILL PUT THE BALL ON THE NET