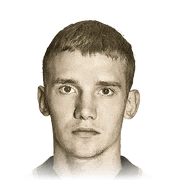 -
Sub out
Upcoming Matches
P. Chemistry
Squad chemistry
ST
85
RW
82
LW
82
CF
84
RF
84
LF
84
CAM
80
CM
71
RM
79
LM
79
CDM
53
CB
49
LB
54
LWB
57
RB
54
RWB
57
Reset
Basic
Sniper
Finisher
Deadeye
Marksman
Hawk
Artist
Architect
Powerhouse
Maestro
Engine
Sentinel
Guardian
Gladiator
Backbone
Anchor
Hunter
Catalyst
Shadow
Comments
Reviews
0
/600
Update my avatar Dos and don'ts
Top Rated
New
Controversial
Show comments
Top Reviews
Only logged in users can submit a review
A review must be written in English
At least 200 characters are required.
Compare this player to other similar players you have used(optional).
If you import your club to FUTBIN or send us an image with the player data(fill the form below) your review will be marked as verified.
Include what you liked about the player in the pros area and what you disliked about the player in the cons area.
Your review will be manually checked during the next 24 hours.
Chem Style Used
Formations
Position
Rate Player Base Stats (1-10)
Pace
5
Shooting
5
Passing
5
Dribbling
5
Defending
5
Physicality
5
Most Used In:
Submit Review

Where to start? For this Weekend League, I decided to change my team around as I had the fortune of getting Joao Felix in my red picks last week. I decided to try out Shevchenko as I loved him in real life and his base stats looked quite good and boyyy am I happy with my decision to try him. I deployed Shevchenko as a sole striker, using the 4-2-3-1 formation, with Salah and Hazard on each side of him, with Joao Felix behind him as CAM (reply in comments for custom tactics if anyone wants them). Now onto the actual review-This guy is utterly ridiculous. I used him with an engine chem style and not once did I have an issue with his pace-however, having used Mbappe previous to him I could tell the difference in speed but then again Mbappe is literally a cheat code this year lmao. For those skillers out there, I guess a downside to this card would be the 3* skills but lets be real-most of youse who complain about players not having 4 star skills don't do any skills except fake shots anyway. In terms of dribbling, he felt surprisingly well on the ball-not exactly the silky dribbling of Neymar but nothing to complain about either. Now onto the best aspect of this card-his shooting. This man can score from literally anywhere. I didn't use a shooting boost on him but I don't even think it is needed, I didn't miss one chance where I didn't expect him to score. As for his passing, he felt relatively average for a striker. Physically this guy was an absolute bully-I've won so many balls back from defenders and shrugged off the largest of defenders with this dude. All in all, I can comfortably say that this dude is the best striker I have used under 1 mil-I would even say he would be up there with Mbappe if he was a bit quicker. I'd definitely give him a try if you haven't already!

-Shooting-this guy finishes everything and has an easy job doing it-by far the best aspect of this card.

-Dribbling-not out of this world but was way better than I was expecting-his R1 dribbling and close control particularly surprised me.

-Stamina-I usually take him off around the 70th min so don't really notice it in game.

-guess you could say lack of strong links bc nationality?

Was really fortunate to pack him relatively earlier this year and I have to got to say, he is way too cheap rn for only 350k. He's the ultimate striker: blistering pace with hunter, shoot anywhere inside the box and watch as the keeper also watches it fly into the net because of the insane shot power. He averages about 1.5 goal contributions per Rivals (Div 4, almost Div 3) and Weekend League (Stop at Gold 3), and hattricks are nothing new to him. You may be looking at his passing and thinking it's too low but he's got a decent short pass game for tiki-taka and will surprise every once in a while with a perfect lofted through the pass. His dribbling can be a tad bit clunky but can execute heel-to-heels, roulettes, and flicks efficiently and effectively (Just avoid Berba spins, he takes a weird glitch touch with those.) All in all, if he plays just as well next year, he'll be my main purchase in the early months. Try him out and this Ballon'dor winner will be lifting many trophies and wins in your FIFA journey. Happy holidays and stay safe!

I tested him as a striker next to Mané in formation 41212 (2), he is a good/solid player: fast and has a good shoot, however he hits many balls on the post and because he does not have 4 * SM his attack is somewhat predictable. His best quality for me by far was the ability to receive the ball in the back pivot and manage to spin, the best striker to do this that I have tested. If u want a icon for chemistry reasons I believe that Crespo Baby is a better option (better dribbling stats and 4*SM), in addition to being cheaper, but Shevchenko is not a BAD player, he is solid and will make the job, just not GOOD enough to make you buy it IMO.

Some strikers I tested and are better than him: Gold Son, Gold Mané, Gold Rashford and Ansu Fati POTM.