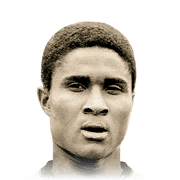 So, before I start with this review I would like to say that I am a pretty decent FIFA player. I play in D1 in rivals and if I play all my WL games I finish around G1/E3.

This card is a lot of fun to use, he bangs in goals with either foot; The 5^WF is very present. The finishing is very consistent and he scores from some weird angles I thought he couldn't.

I personally really like to have one big player in the team, instead of having a full meta team with the best player in each position. Last weekend league I used Mbappe and CR7 together and even though I am a use fan of both in real life; It did not feel that special since every team in D! has either Mbappe/Neymar Mbappe/CR7 CR7/Neymar etc. This card just has that special pressence on the pitch, that feel of invincibility. When you score with this card and opponents kick off and you see his card flash up; on the pitch it just feels great . He has pace, physical and you never have to sub him off. This man honestly is a gamechanger.

However, this card is crazy expensive. I saw there was no review of Eusebio this year so I thought it would be good to put on here so you know what you get your self into if you are lucky enough to afford this card, or pack him even. The price of this card does not justify it. BUT, I think there is not a single icon out there worth it for non professional FIFA players. If you want to sweat out your games, I would build an insane meta team with CR7,Mbappe and Neymar from this amount of money. However, if you are like me and want to try something different than what your opponent has every game; Your gamechanger has arrived.

Movement off the ball

Has that special feel you don't get with regular cards

Pressence is noticeable on the pitch.

I have done three base icon SBC's this year. In my first I got Riquelme, whom I was quite upset about. The next brought me Socrates, who I enjoyed much more than I did Riquelme, and I thought that Socrates was going to be one of my staple attackers for some time to come. I decided to do another about a week or so later, and that is how I got my hands on Eusebio. Clocking in at approximately 3.7 million coins on Xbox, I can comfortably say I have never owned a player so valuable in my 8 years of playing FUT (at least not this early into the cycle). Considering I already had a freeze Bernardo Silva untradeable that I was linking with POTM Felix, I knew what had to be done. With Felix and Eusebio up top with Bernardo pulling the strings behind them, I have discovered what I believe to be some type of footballing nirvana. Eusebio is the definition of a game-changing player. He is a player who will win you games that you feel like you probably shouldn't have won. This is a card that will bring you moments after you score with him where you think, "is this really fair?". Before I get into how he plays specifically, one of the biggest advantages this card brings you is the fear factor. When someone sees Eusebio chilling in your strike force before the game begins, 9/10 times the player will spend a vast majority of the game desperately marking Eusebio, or at least attempting to. His reputation means that players will ruin their defensive formation to try to prevent Eusebio from seeing any of the ball when you are attacking. If you have other good players around him, it makes it extremely easy to abuse this by playing around Eusebio. At that point they either let you walk through their defense because they are too busy worrying, or they stop marking him to challenge which is when you give the ball to Eusebio. He has 95 pace without any chem style boosts and it feels accurate. It is very rare that he gets caught up to on breakaways, however this is FIFA so there are times he will be outran and overpowered by defenders. His acceleration is fantastic and makes it quite easy to make space to shoot for yourself. Eusebio also has 95 agility and 93 balance on his card without any help from chemistry styles, making him ridiculously nimble and maneuverable. With a marksman applied onto him, his other dribbling stats get boosted to mostly high 90's on top of this. Oh my god. With the 5* weak foot, there is simply NO knowing which way you are going to cut with him. And if they do make the mistake of giving you JUST enough space for a shot, it's over. He's celebrating. His shooting stats are well rounded, the marksman makes the notable stats 99 finishing, 97 shot power, and 99 longshots. It really doesn't matter where you're shooting from, or what type of shot you choose to take. The shot power is the cherry on top and really makes it that much more fun watching shots fly by the likes of Pope and Alisson. His passing stats are just good. Plenty good enough if you are playing him at striker, and honestly good enough to play him at CAM as well without boosting his passing. He doesn't pull off Ziyech level crosses or KDB level through balls, however misplacing passes is rare for him. To wrap up the main takeaways from this card, his physical stats are great as well. 89 jumping gets boosted to 99 with a marksman, and he is genuinely a decent aerial threat. Do not be afraid to give him a cross or aim for him on corners. Him being given 94 stamina feels like EA simply wanted this card to be flawless. He will last all game no matter where you play him. This card has brought a new level of fun to the game for me, and honestly the only con I can think of for this lad is that since packing him, it's almost only down from here.

So i was lucky enough to pack this absolute legend in my base icon pack on saturday, and boy oh boy was i excited. I've run him up top in a 4222 with FB aguero at ST. Let me tell you, this man does not miss. Left foot right foot it dont matter, with a marksman chem style, everything he touches turns to gold. I played him in the second half of WL, and he helped me clutch up gold 1. I also tried him in div 2 in rivals, and his record is still amazing. His dribbling is silky smooth and he can outrun pacey defenders like ferland mendy and joe gomez easily. His passing could be better, but if u play him at striker, his passing is much better than needed. And with a marksman chem style, his phyical is rlly gud with 94 stamina, 99 jumping and 80 strength

All in all, he is just a goated player, maybe a bit expensive atm, but i'd still say he;s prolly worth it

Nothing really, his passing is low, but dont matter at all when u play him as a ST