Maybe it is just me, but when I see an opponent in the middle of Weekend League using the NIF Quincy Promes I know I am in for a walloping.  Beyond the classic options; CR7, Mbappe, Neymar… I swear gold Promes has tallied the most goals against me this year.  With that in mind, I simply had to get my hands on RTTF Promes for this past weekend; I figured it would be fun to benefit from his talents as opposed to being abused by them for once.  Although I should say that throughout the review I started to feel bad for Promes who was ultimately stuck in Neymar’s shadow all weekend long. Much like players today not named Messi or Ronaldo, it is an uphill battle for recognition when there are others on a completely different planet than you.  However, Promes did manage to hold his own throughout the weekend, producing 13 goals and 19 assists while also adding key link-up play and providing pivotal pressure on my opponents' back lines.  I decided that the HAWK chemistry style would help Promes take flight and in the end was not disappointed with my decision.  The excellent combination of Pace, Passing, Shooting & Dribbling made Promes a perfect candidate for the ST position in the 4-4-2 and dropping back into the CAM in my 3-4-1-2 formations.  If you follow me on Twitter: @IVIaeNine you would have also seen that Promes contributed heavily to a return to Elite this weekend as well...  Promes dropped the AJAX on my opponents all weekend long in the following squad: 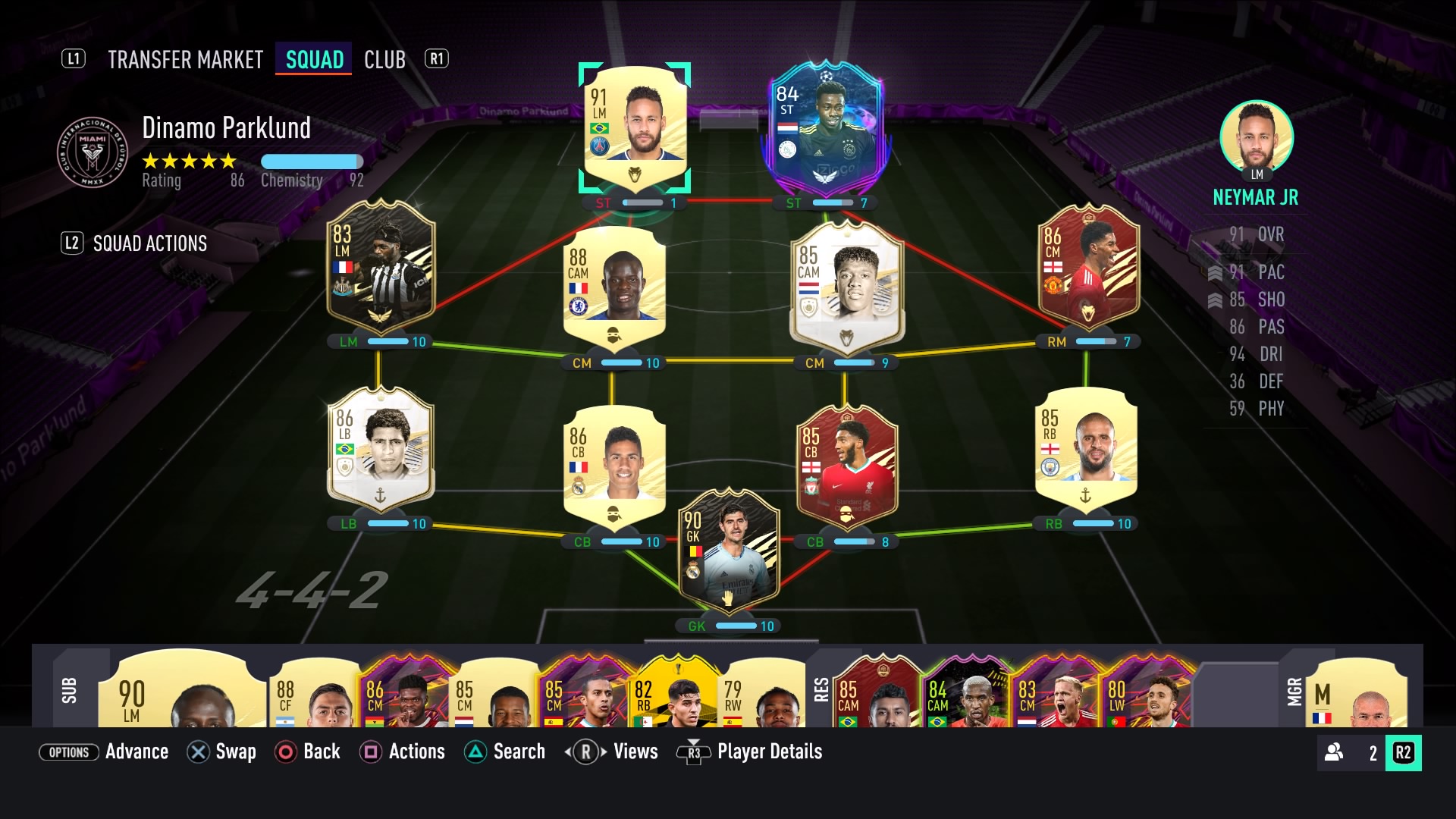 I found Promes to be one of those cards that can be just as fantastically brilliant one game as he is pathetically frustrating the next.  The problem for me was that there appeared to be no rhyme or reason to it.  Normally you can blame connection and say that “this player can’t perform in sluggish gameplay.”  In which case it is hard to blame the card when it is ultimately an issue with the game.  However, Promes was hit or miss at random; or at least that was the case in my experience… hat tricks and multi-assist games followed by a complete disappearing act that Houdini himself would have marveled at.  It eventually got to the point where I had to make some changes for my final 5 matches because I needed to trust everyone to show up in order to return to Elite.  The sad part is that I really enjoyed the card throughout the weekend as a whole and there really are some amazing attributes you can pull from this card.

Obviously, the ideal FUT traits would be the coveted 5? SKILLS & 5? WEAK FOOT masterclass.  Unfortunately (in my eyes) Promes then has the “if only” combination of 5? SKILLS & 4? WEAK FOOT and maybe I am alone in this thinking, but I just prefer the opposite option of 4? SKILLS & 5? WEAK FOOT.  However, I should shine some light on just how good this card is on the ball and granted the skills play a huge part in this.  Promes does not feel quick on a dead sprint even with his 94 ACCELERATION & 97 SPRINT SPEED… in fact, this was one of my key issues with the card overall.  However, when you combine the 87 AGILITY, 80 BALANCE & 83 BALL CONTROL this card starts to feel a whole lot more dangerous.  Some of the dribbles that you can pull off in tight situations at the top of the box will make even the deepest of dropback Danny’s dance… leaving opportunities to find the open option and a big contributor to Promes’ 19 assists.  Obviously, if you utilize some of the exclusive 5? SKILL moves you will get even more out of the card, but either way, you will be happy with how this card reacts on the ball.

This is going to be one of those categories where I get some comments regarding confusion, I know it.  But it has to be said. The shooting with this card is one of the areas that I was referencing when I said you never know what you are going to get with this card.  With a 4? WEAK FOOT, 89 FINISHING, 95 SHOT POWER & OUTSIDE FOOT trait you would expect this card to be pretty clinical in front of goal… and he was… at times.  It felt like some matches Promes was up there with the most clinical of players I have used, finishing off difficult chances and bagging hat tricks for fun.  Followed by three matches in a row where the only threat Promes posed was to the steward standing in Row Z of the empty stadium.  I can say that it is a good thing they installed the giant covers over the seats to bring the balls back down from orbit because Promes was kicking field goals when he should have been finishing off my opponents.  So how do you rate his shooting then?  For me, I look at an 8.5 as respecting the fact that he can certainly finish and on both feet which would normally be a 10… but the lack of consistency means a disregard of in-game statistics alone, with the lack of constant in-game performance causing a drop.

250k…. It is actually crazy to search the players currently in the 250k - 300k price range.  Basically a giant list of poor and seldom used ICONS… Varane, IF Valverde, OTW Havertz and RTTF Promes.  None of which has 5? anything and none of which really jump out at me as being on the same level as Promes.  So on that note alone, I think I find Promes in good standing to get a 5/5 for Value for Coins.  However, we need to discuss the nature of the card and what could possibly happen to this card in the future.  While in the long run, it would be beneficial to this card if AJAX found their way into the Europa League, where AJAX would immediately become one of the favorites.  However, the lack of immediate upgrade and the time it would take to get to the levels I am talking about would leave the card drowned out by other options come Feb-Mar.  The question then becomes can AJAX make it out of the group stage?  And for me they are the favorites to finish second in Group D for a variety of reasons, which we can discuss in the comments or DM me on Twitter if you like to talk football.  But with my own prediction in mind, I then picture this card as an 86 and I think he could remain a solid option in the future moving forward, making the card definitely worth the price tag.

When you start to break down this card you realize that it is actually a really well-rounded attacking option.  The defensive side of things is a completely different story, but one I won’t be telling today.  When you look at the two categories I have not really touched on in the Passing and Physical side of things you see a card that has some okay statistics, no stand-out qualities and really not any glaring weaknesses.  In the end, I think that is the perfect summary of Promes as a whole… Okay, with not many stand out qualities, but no glaring weaknesses… a spot on 8.5/10 overall.

When you pay 250k for a card you want to see improvement on the 80k option it is replacing… and hopefully you are not expecting the results of the 500k option that you are working towards.  For me, Promes is exactly what a 250k should be and delivers on that level.  I do wish that it was more of a steady 8/10 performance from this card instead of the 9.5/10 on match and a 7/10 the next.  It would have been easier to explain this card in the review without seeming contradictory … and it would better inform your decisions.  But I guess if you look at it this way, this is a 250k card that is capable at times of performing WAY beyond that expectation, and perhaps that makes Promes worth every coin to you.  While I won’t sell him to you as a game-changer that you must have, I Promes that he is an improvement on what is available around this value (I told myself I wouldn’t do that).  I hope you are all safe and well.  Cheers for reading. 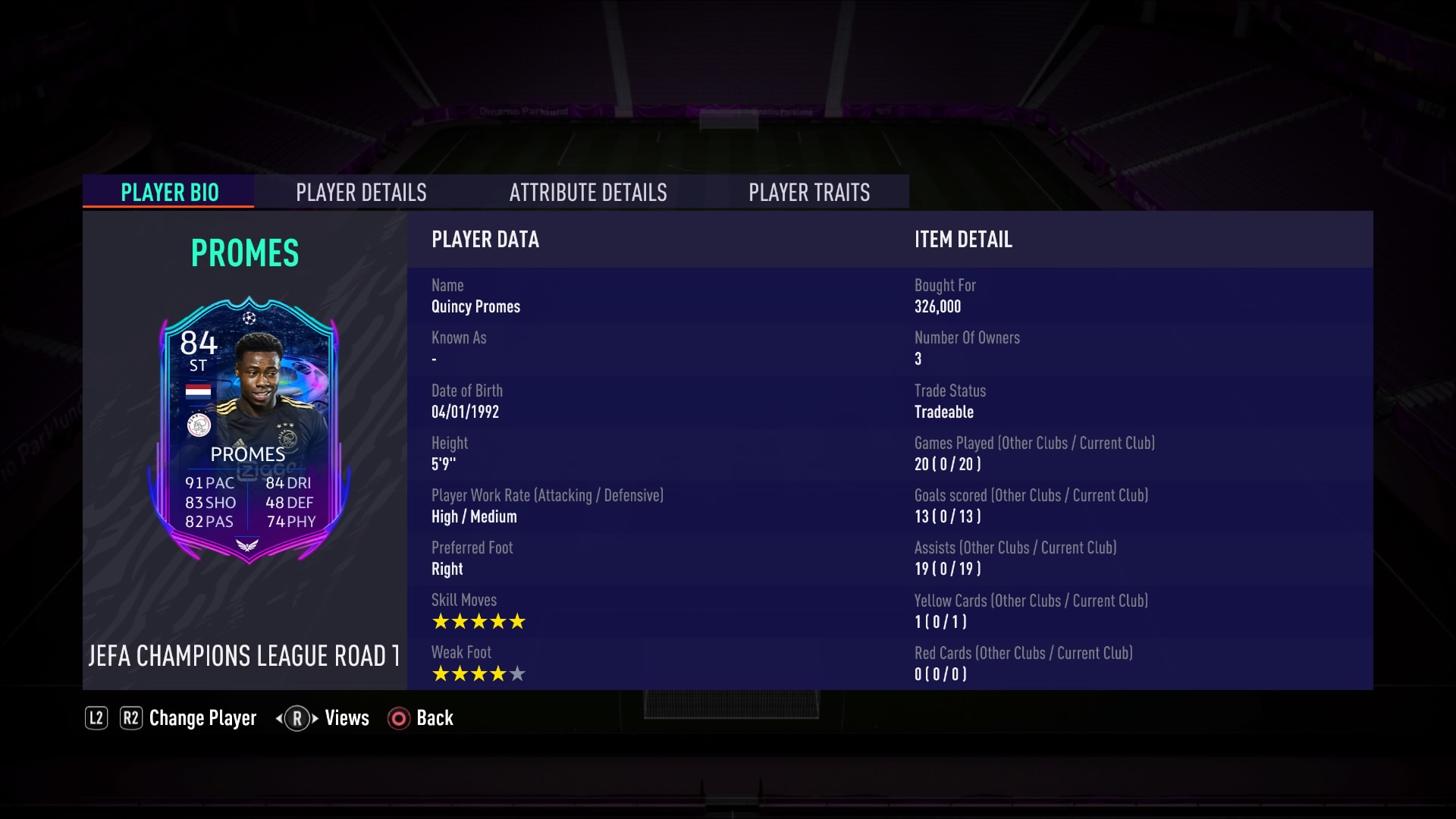 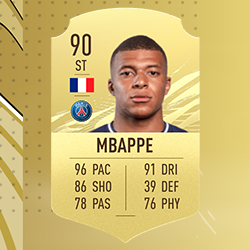