Future Stars… still my favorite promo and definitely my favorite acronym of all the special cards.  With the drop of Team 2, I immediately had big plans for my squad this weekend, but an hour of trying to snipe Saka definitely had me saying FFS about more than the promo.  With a change of gears, I was able to sort out a second squad and actually got a chance to try RTTF Renato for the first time this year (who is as insane as people suggest), which just goes to show there is a silver lining in everything if you look close enough.  One card that didn’t change in either mock up was FFS Curtis Jones … and yes I am aware that I have been preaching SBC avoidance for the sake of my club’s resources, but it had to happen didn’t it.  The decision between the LM and CM took me all of 3 seconds and it is obvious that you do not want to miss out on the center mid version of the boy from Liverpool.  The base statistics on 88 Jones in the CM are fantastic, just how good?  Well, if you take the base statistics of Curtis Jones and put them into FUTBIN you get a result of 3 players that can make the well rounded threat that this card possess: 96 TOTY Kimmich, 97 TOTY Bruno Fernandes & 93 Prime Gullit… that is it, that is the list.  With an already impressive set of statistics, it was a challenge to pick just the right chemistry style to put Jones over the top… SHADOW & ENGINE were ultimately my choices, with SHADOW the most significant as the CM in my 4-4-2, while ENGINE did the trick as a CAM in the 4-2-2-2 formation.  Regardless of where Jones lined up in the midfield this weekend, he truly was a Future Star in the following squad: 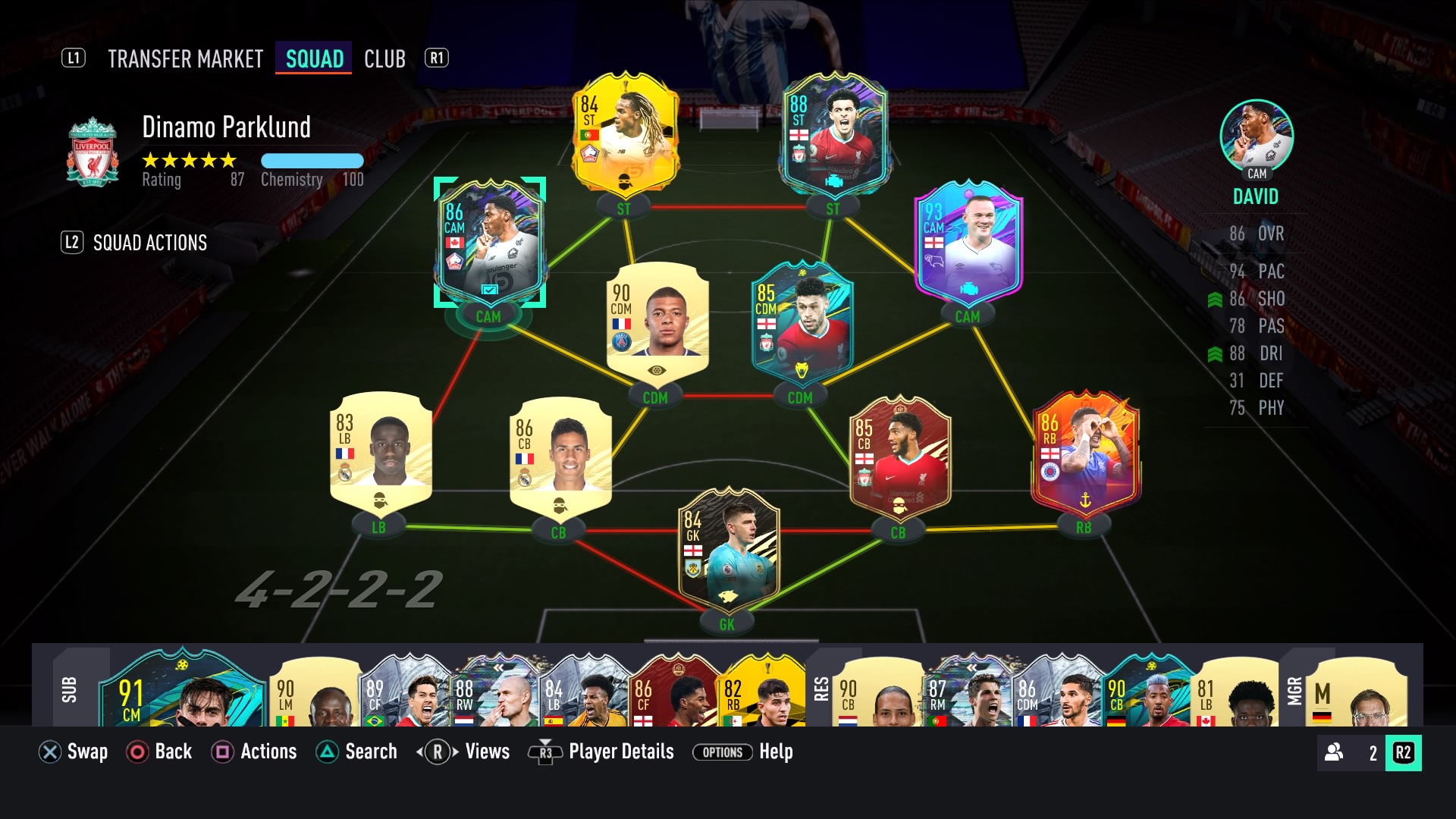 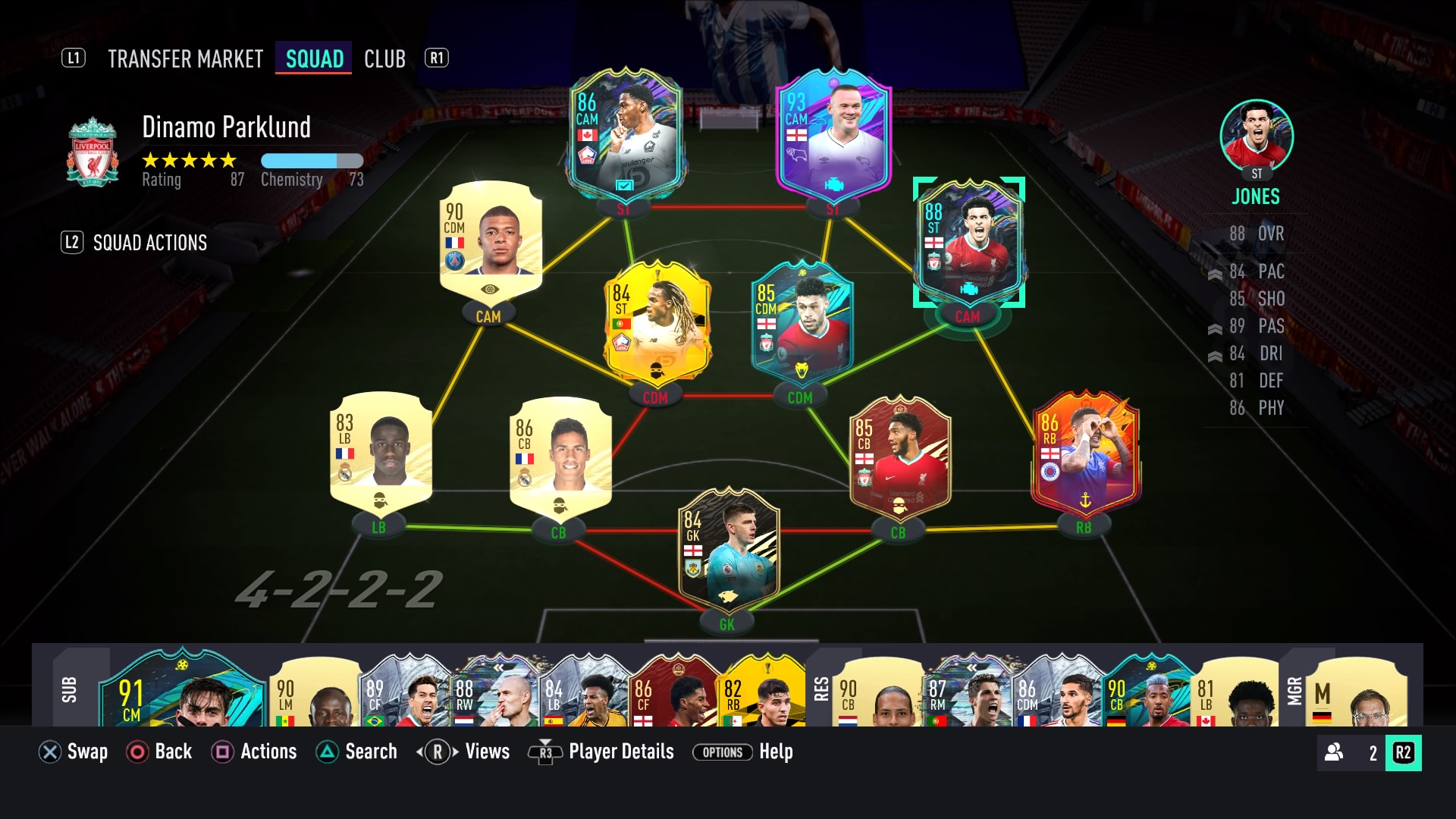 This rating was extremely difficult and I actually should have put two separate ratings based on where I played Jones.  This card is incredibly versatile and I could see FUT Managers considering Jones as an option in virtually every position.  As an out and out CM patrolling the middle of the pitch; winning the ball back, setting up attacks, spraying the passes around the pitch & chipping in with the odd goal… this card is a 10/10.  In the middle Jones seldom put a foot wrong and in the 4-4-2 he was a force to be reckoned with.  In the wider areas of the 4-2-2-2, I was blown away by the number of goals Jones contributed in only 10 matches… his passing was immaculate and his dribbling was surprisingly responsive but was helped by a change to the ENGINE chemistry style.  Overall, the card is insane.

The size of this card was always going to be either the greatest strength or the greatest weakness when it came to this review.  It is uncountable how many promising cards with excellent statistics have been undone by their card size in-game. Given the latest patch, I was extremely worried that this card would fall victim to the same fate.  But with Jones, it was the exact opposite as the mixture of 84 AGILITY & 82 BALANCE with his LEAN body type allowed the Englishman to glide around the pitch with ease.  At the same time, the size of this card still allows the benefits of the increased strength on the ball.  82 STRENGTH was key in physical battles in the middle of the pitch, while 95 STANDING TACKLE & 94 SLIDING TACKLE often meant that Jones won out in crucial 50/50 moments.  FFS Jones is a force when it comes to two of the most important features in the center of the pitch… ball retention and ball recovery and was key to a lot of the success that I had this weekend.

Now normally we dive right in with the finishing statistics and discuss quality in front of goal, but in this case, I wanted to start in an area where Jones is borderline unparalleled compared to other midfielders I have used… his passing.  With 96 SHORT PASSING & 88 LONG PASSING, it was incredible the way that Jones could find teammates in space.  In the current patch, I have not used many cards like it, but previously it certainly was a throwback to FUT Freeze Marquinhos.  Obviously the 4 STAR WEAK FOOT plays a factor in the different variety of passes Jones was able to hit and transferred well to his shooting ability as well.  Playing as the right CAM in the 4-2-2-2 Jones filled the net as his 82 FINISHING, 91 SHOT POWER & 90 LONG SHOTS combined for some crucial goals throughout the weekend.

445k. Which has been inflated by the Party Bag madness, yet still can’t be matched by many in terms of quality for value.  If you go back to the list of players in the same statistics bracket, the cheapest being TOTY Kimmich would run you 2 million coins.  This card is a premium card, but it doesn’t feel like you are paying the premium price and for me, that’s a bargain, and most likely why I faced Jones in the majority of my final Weekend League matches.

As you can tell by my findings thus far there were not a lot of negative takeaways after the 20 match review to report.  Even with the ENGINE chemistry style, 90 ACCELERATION & 88 SPRINT SPEED felt quicker and faster than I would have normally anticipated.  90 STAMINA is just enough to keep up with the High/High work rates and even the 76 CROSSING is improved if you go the ENGINE route.  In the end, I would say that the 73 VOLLEYS was a weak spot, despite only getting a few opportunities to really test it out… and maybe he could have been slightly more clinical in front of goal overall.  In saying all of that I guess the major weakness with this card is how woeful he was from dead balls.  After about 5 matches on free kicks, I had to save Jones from further embarrassment, but that was all I could find… the card is cracked, end of.

I started to worry at one point in my review that I was suffering from Liverpool bias.  I love the Future Stars promo, the thought of another Liverpool option was exciting, and overall the card was performing like a beast.  With that in mind, I decided to take a look at what some others were saying… in general, I try my best to stay away from other reviews until I am done in order to avoid being persuaded by others opinions… but something about this review made me feel like I owed it to everyone reading to get an idea of what other experiences were like.  In general, I did not come across anything lower than an 8/10… while some went as far as calling him the English Gullit.  For me it is right in between those assessments… the card is obviously not Gullit, but at the same time puts in performances that make you wonder, “if this card is this good, how good must Gullit be?”  So with that, I say 100% I recommend this card and hope you have the same insane results that I experienced this weekend.  Maybe the most telling point is that those results have continued into this week.  That’s right… I fired up some Div Rivals matches just to use this card a bit more… it’s that fun.  Hoping you are safe and well. Cheers for reading. 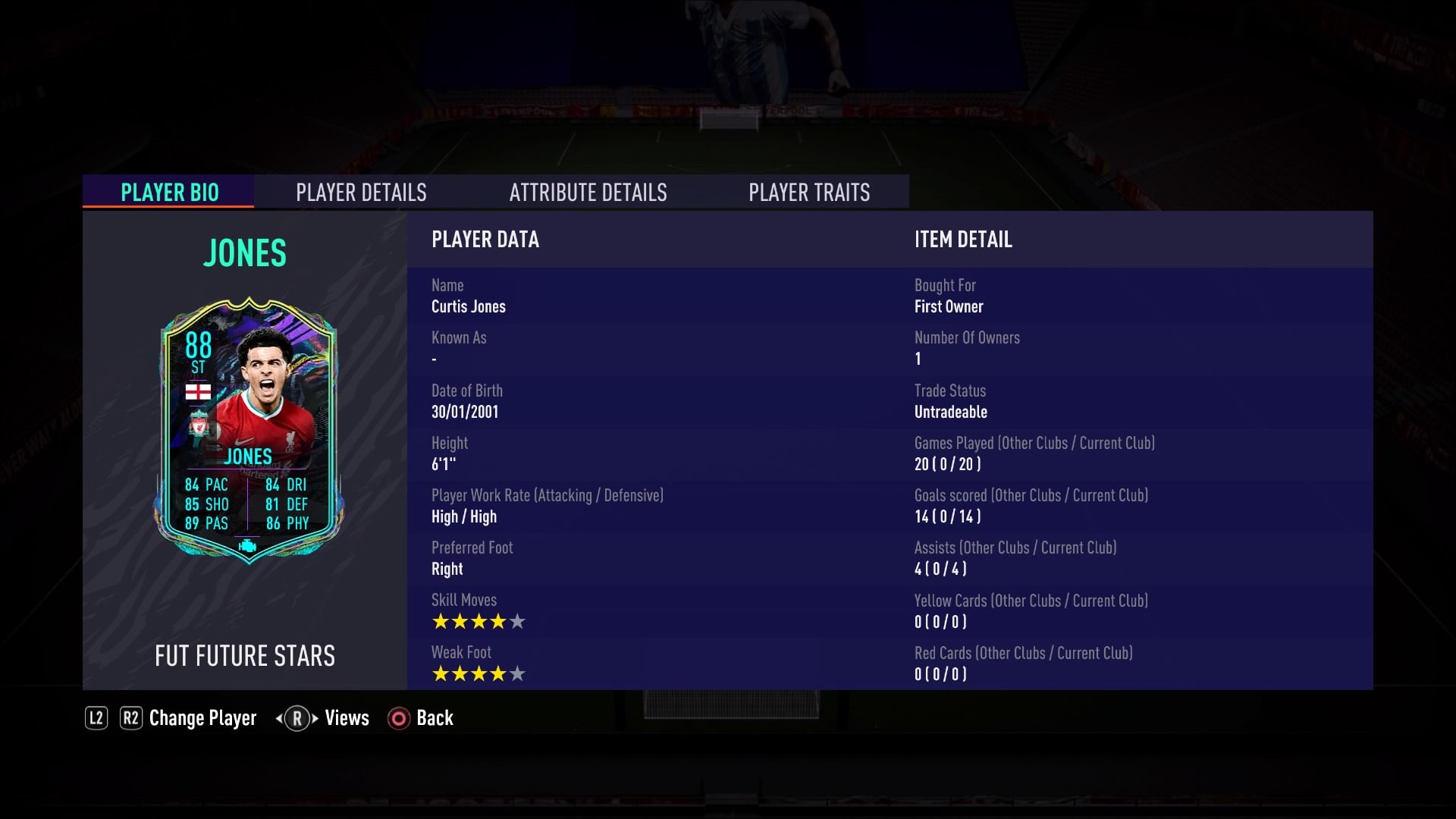 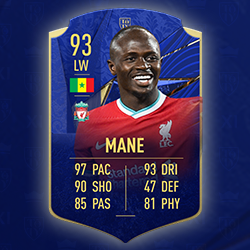